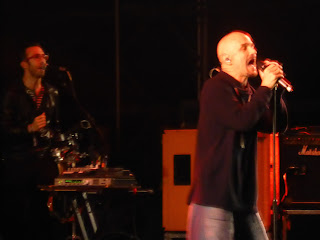 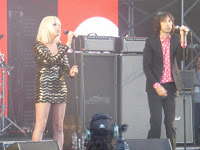 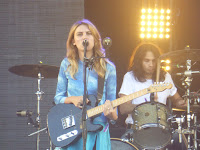 The final date of the festival season and James headline the inaugural On Roundhay. They deliver a set heavy on hits and Girl At The End Of The World,  a perfect mix for the casuals and the die-hard fans.  Also on the bill were Primal Scream and Wolf Alice.

By the time we arrive on site at 5pm, it's clear that On Roundhay has lived up to its billing as a family-friendly festival and we're faced with the strange situation of being able to amble up and get a beer without a queue, but forty five minutes to get some kind of street food from any of the stalls. Whilst the event could be deemed a success, they do need to find some way of dealing with that situation as well as one to get the crowds in and out of Leeds centre to the park.

Wolf Alice are the first band we catch and its clear that they've won the teenage vote as the front rows are awash with boys and girls on their friend's shoulders singing along to every word and with songs like Your Love's Whore, You're A Germ, Lisbon and Blush it's no surprise why. They do seem to have problems with the sound, the bass on the louder songs and just volume on the more intimate Blush, but that no way detracts from the positive impression they leave. They might be a bit away from conquering fields of this size, but in Ellie they've got the perfect front woman who can deliver a biting lyric and cast off with a smile on her face, whilst Joff and Theo's exaggerated stage moves add a sense of fun to their set. 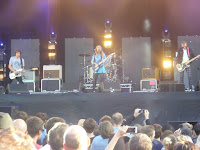 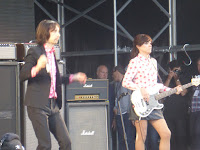 Primal Scream are a mixed bag, they veer from the sublime on songs like Swastika Eyes, Riot City Blues and songs from the new album Chaosmosis (Trippin' On Your Love, 100% or Nothing and Where The Light Gets In), particularly when Hannah Marsden shares vocal duties to the almost shambolic when the songs from their masterpiece Screamadelica (Come Together, Loaded, Damaged) and its follow up Give Up But Don't Give Out (Jailbird) are turned into rambling noodling pastiches, heavy on backing track, of the songs that marked them out as one of the most outstanding and ground-breaking bands of that time. Those songs still get the rapturous response you'd expect on the sheer weight of recognition, but it's the other songs that really grab you and where it feels their heart and soul is.

James opening with Getting Away With It is a sign of intent for the evening as it’s been played little this year and still ranks amongst the fan favourites and a nod, looking round, to the fact that whilst there’s plenty of James shirts in attendance, a lot of this audience are here for the festival vibe (extortionate beer prices and forty five minute queues for street food plus a lot of children as the event was billed as family-friendly). It’s followed by an immediately recognisible drum beat that ushers in Sit Down and the field becomes one in unison singing along, although band and crowd do go out of step at one point. The grin on Tim’s face at the end tells us that it still has the power to generate an extraordinary reaction. 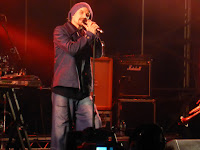 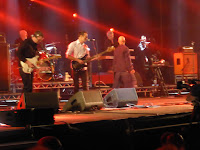 Surfer’s Song is the first of the new ones and doesn’t feel at all out of place here. The band’s more powerful sound on Girl is perfect for these big outdoor gigs, and, as is his wont, Tim comes out and surfs amongst us. It’s followed by To My Surprise with no parental guidance warning so it’s amusing to see a young girl on her dad’s shoulders mouthing the words “were you just born an arsehole?”.

Laid’s another song that was rested on the May tour and feels like an old friend again rather than the annoying relative that hung around, testament to James’ policy of rotating their songs around tour by tour. It had been overdue a rest and it feels like it’s benefited from it.  It’s followed by Sound, perfect for the rolling hill that’s in front of the stage as it fills the bowl with its claustrophobic expansive beat. Interrogation has a similar effect, the intimate paranoia of the song translates without getting lost.

Out To Get You is a real test for the band sans Larry and Adrian and whilst stand-in guitarist Stuart Cartwright doesn’t put a foot wrong all night (we’ll come back to him in a bit) it makes for an interesting take on the song without the prominent slide, but Mark and Saul finish it off with a dueling violin and melodica ending that builds to a simply stunning climax with the audience hands raised clapping along. 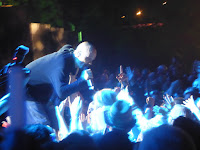 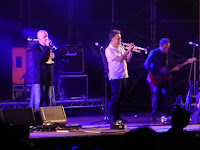 “This is a divorce song” says Tim prematurely as half the band leave the stage for a semi-acoustic version of She’s A Star, topped off by a beautiful soft lilting trumpet from Andy that hangs in the air.  Dear John does follow and from unassuming beginnings when it was first played live, it now feels something of a triumph. Catapult has the same impact as Surfer’s Song and Tim’s back down amongst us, high-fiving the front row and completely breaking down the gap between band and audience.

Moving On feels particularly poignant in Leeds, Tim’s home town, and one look around shows how much this song means to others, a potent sign that the band can still make an emotional connection after all these years. It’s followed by its antithesis, Nothing But Love, is a celebration of love and life rather than death dedicated to a couple who got married earlier in the week.

Sometimes is a real triumph, it’s not drawn out, played straight, but with a great  short solo from Stuart who takes his moment in the spotlight almost reluctantly. As it stops the audience take it back without prompting or hinting and the refrain fills the night air for several minutes before the band come back in as Tim dances without accompaniment other than the sound of our voices. 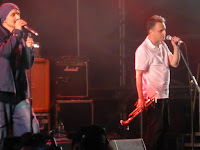 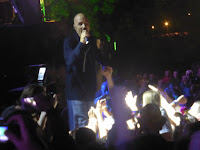 Attention is described as one of the band’s favourites off the record and its slow start does dampen the crowd around us for a little while, but, once the song stops and builds back in, the arms are back in the air, another girl on her Dad’s shoulders sings every word like she’s reciting the alphabet. The night’s finished off with Come Home, a song that still feels as fresh and loose as it did twenty-seven years ago when it first came out.

As the crowd bellow for an encore, the Cockney sounding announcer gets booed, but it’s soon replaced by cheers as the band come back for Say Something. Like a lot of tonight’s set, it’s played dead straight and feels much better for being shorn of the improvised middle lyric section that’s accompanied every version we can remember this century. We’re then left with several thousand others to somehow navigate our way back into Leeds.

It’s a perfect end to the summer festival season. Necessity might have required the band to produce a less challenging set-list than they would often throw up in such circumstances, but sometimes doing the unexpected can mean blasting out a series of hits because that’s what you would possibly least expect. Stuart’s contribution was solid, he didn’t make any attempt to show off and Jim was on hand to guide him when needed – he did exactly what was required of him, like the referee at the football match who has such a good game that the attention isn’t drawn to him.

James played Getting Away With It (All Messed Up), Sit Down, Surfer’s Song, To My Surprise, Laid, Sound, Interrogation, Out To Get You, She’s A Star, Dear John, Catapult, Moving On, Nothing But Love, Sometimes, Attention, Come Home and Say Something.