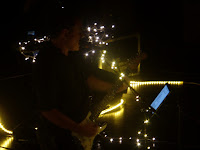 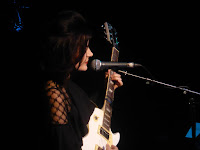 The Wedding Present's latest album Going Going is a concept album, a soundtrack to an imaginary film that's packaged with the record. To celebrate they're in the middle of an intimate tour of theatre venues to perform the entirety of it set to a visual backdrop of the film. To that end we found ourselves in the splendid surroundings of the Quays Theatre at the back of Salford Lowry to witness a very untraditional Wedding Present gig.

The evening opens with a short set from Such Small Hands compromising of electronic guitar set against a backing track by Melanie who later appears in The Wedding Present's set. A set of dark songs is laced with a little self-deprecating humour between songs, such as the final and finest song Psycho, which is described as "about being a psycho, but that's fine." The songs have a very intense feel to them, sung from the heart and we imagine from dark places as she tells that Rachel is about not liking being alive and Ghosts about a friend of hers who recently died. The intensity of the songs and the performance hold the listener's attention though, never an easy thing as a support act in a seated venue.

As the lights dim, a voice comes out reading a narrative over a string-laden background for the first couple of minutes before the band make their way to the stage. Tonight The Wedding Present are a six-piece, David Gedge the only constant on guitar and vocals and augmented by Katherine on bass and backing vocals, Melanie on keyboards and backing voals, Sam on guitar and keyboards, Danielle on keyboards and drums and Charlie on drums. The line-up tells you a lot about parts of the show tonight - whilst large parts of the more traditional song elements are a four-piece band, the instrumental sections that provide an eerie atmospheric backdrop to the sedate film running behind them are far removed from what you'd expect from a band with the history of The Wedding Present.

And somehow it works. The opening fifteen minutes are a mix of quiet introspective instrumentals with the occasional interruption of a barrage of amped-up loud guitar, a solitary drumbeat and sampled elements of the shipping forecast. Gedge tells us part way through that the album is a concept and hopes it's not too dark for us, joking that he's not turned into Rick Wakeman with a big cloak. He expands that the film and soundtrack has hidden depths and we'd tend to agree that other than a water theme we do struggle to link the film to the music on first viewing and the fact he tells us all the songs are named after parts of the USA for most of the set confuses us more. It makes some sense as Santa Monica brings the evening to a close with a sunset at the beach scene, the sun slowly dropping down behind the cliffs as he departs the stage leaving the band to play out the final moments until the sun has gone. 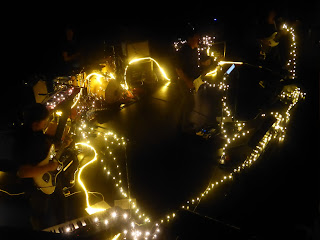 Whether we get the concept or not doesn't seem to matter too much at the time though as what we witness feels like a creative rebirth. The instrumental parts are beautiful when they're at their quietest and most subtle and you can hear a pin drop as the disciples listen attentively. As the set progresses the "song" elements of the record make their presence known. The sound in the Quays is spectacular, allowing everything to be turned up to the max without distorting or bleeding - Gedge jokes "I've played some shitholes, but this takes the biscuit" to raucous laughter.

Two Bridges is unmistakably Wedding Present as you'd expect. Gedge's distinctive vocal means that's inevitable, but this feels like a creative rebirth for them. Rachel, which he immodestly describes as the best pop song you'll hear this year, almost lives up to that billing, but it's supplanted by the two minute furious blast of Secretary, the male/female vocal interchanges of Broken Bow, the thrash of Emporia and the final denouement of Santa Monica as the stand out tracks in their strongest release for a long time. Whereas these concept type albums can often be laborious fare, there's none of that tonight, we get refreshed by the interludes such as the sampled vocals of Wales between the full on onslaught of the guitar-heavy tracks. Not playing the album in order allows them to structure the set to retain our attention.

We'd have to give the film another viewing to decide whether that element of the concept works for us, but the album itself and the live performance is an unmitigated success, far more so than we'd anticipated. The instrumental atmospheric sections segue perfectly with the louder rock sections to create a unique live experience and one that sent us home eager to delve further to explore those hidden depths of the film and album.

Email ThisBlogThis!Share to TwitterShare to FacebookShare to Pinterest
Labels: The Wedding Present