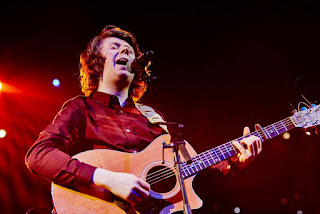 Manchester singer-songwriter James Holt and his band take to the Smaller Rooms Stage at Ramsbottom Festival at 2.35pm on Saturday. We had a chat with him about his Sanguine On The Rocks EP, his recent charity single Butterfly and plans for the future.

Hi James, could you tell us a little more about yourself please?

I'm James Holt. I'm a singer/songwriter from Manchester. Two highlights of my career so far: played solo at the Royal Albert Hall. And Brian Eno chose my song 'Whatever Happened to John?' to be commended as part of the NOISE arts festival, he said of the track: "Brisk, funny, exciting… this track feels fresh and exciting to listen to" - I was also invited to meet Eno at his John Peel Lecture last year, lovely bloke!

You released your EP Sanguine On The Rocks earlier this year.  How did the title of that come about - and what reactions have you had to getting six tracks out to people?

The song "Sanguine On the Rocks" is about someone having their energy, ambition, confidence and motivation taken from them (by other people) - there are lines about parasites and blood sucking and I thought about a title that related to this theme.

Sanguine means to be positive, hopeful or confident, and is derived from the latin word for blood: sanguin. "Sanguine On the Rocks" sounds like a cocktail which relates to the blood drinking and could literally mean "Blood on the rocks". (fun fact - when I hosted my "Sanguine On the Rocks" launch party at the Kings Arms, Salford, we gave out free SOTR cocktails.

The EP's had a great response, so pleased that people have been responding so well to it! Not only fans and music lovers, but radio stations such as BBC Radio 2, BBC Manc Intro, BBC 6music, KCRW. Big love to everyone who has purchased, supported and played the EP!

You recently released a charity single Butterfly.  How did that come about and which charity benefited?

The 'Butterfly' single is for the Royal Manchester Children's Hospital Charity. I heard some time ago that at the Royal Manchester Children's Hospital they have a butterfly ward, which I thought would link well with the song - apparently they change the ward names every-so-often so it's not called the butterfly ward anymore, but after talking to the charity and finding out that they were raising funds for a new onsite helipad I wanted to help anyway I could. I knew that a lot of people liked the song so I thought: "why not give it to the charity?", so I did.

They were delighted that I offered to help. Angela Rowe, Community Fundraising Manager for Royal Manchester Children's Hospital Charity, said: "It's wonderful that James has decided to support our Children's Hospital through the release of his Butterfly single and charity gig. He should be very proud that he is using his love for music to help benefit others by raising as much money as possible towards our charity's Helipad Appeal. James is a very talented musician and I encourage everyone to download his brilliant single!"

Big thanks to Gullivers for letting us use the venue for our 'Butterfly' charity single launch in July!

You play gigs solo and with a band.  Do you have a preference?

I guess I prefer band gigs more. There's something special in playing an intimate solo show with an attentive audience but I really love playing with other musicians, and the musicians I work with are some of the best musicians on the Manc scene.

You're playing Ramsbottom Festival on Saturday, the biggest festival in the North West.  How did that come about and are you excited about it?

I'm playing Ramsbottom on Saturday at 2:25pm on the Smaller Rooms Stage and I'm really looking forward to it. It's my first time at Rammy fest and I've heard nothing but great things about it!

What are your plans after Ramsbottom?

I plan on gigging more both solo and with the band, I've got Salford Music festival coming up and a few more exciting shows coming up over the next few months. I have a new EP in the works called A Night On the Blue Mountain, it's pretty much all recorded now and just looking into mix/mastering, it'll be released next year.. but for now, you can hear the live version of the title track from our session for Manchester TV in the link above !

How would you describe your music to someone who hasn't heard it before?

ooh errmm, I'd say a mixture of the Beatles, Radiohead and some Jeff Buckley for good measure.

The single is still available and all proceeds go to RMCHC, get it here