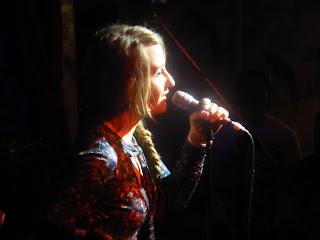 Margo Price brought her show featuring tracks from her solo debut Midwest Farmer's Daughter and a number of covers and interpretations of friends' songs to a sold-out and attentive audience at Manchester's Deaf Institute on Tuesday night. Backed by a five-piece band Margo's alternative country style, her infectious stage presence and show-stopping voice brought the house down in a way we'd not witnessed at the venue before.

For an artist with little mainstream exposure in the UK selling out the Deaf Institute is no mean feat, but it's clear from the very start that tonight's audience are more knowledgeable than most, a fact Margo alludes to when he thanks them half way through for their respect and silence. However, it's no surprise given what we have the honour and pleasure to witness.

"We're gonna play some country music for you here" is the introduction to About To Find Out, one of eight of the ten tracks from her debut solo album Midwest Farmer's Daughter that's played tonight. This is more than country music though despite all the traditional elements being present and correct; Margo has the star quality and the songs, both her own and the selection of takes on standards, to deliver something far more than that.

Her five-piece band The Price Tags, including husband Jeremy who she both admonishes and credits in equal measure, are a phenomenal unit with pedal steel, guitar, bass and drums that create the fluid, loose base which is just perfect for Margo's Nashville-hued singing voice. They take centre stage for a mid-set instrumental, Swarmin', but throughout they take command and fill out the spaces without ever taking the focus from Margo who revels in dancing around the stage and banging her tambourine when not holding us spellbound with her voice. Apart from one song mid-set a finger injury sustained in a car door prevents Margo from playing guitar herself. 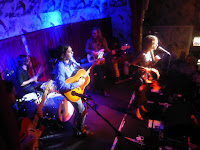 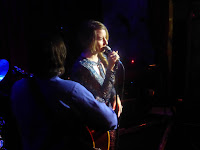 The exuberance of the performance and the response of the audience doesn't quite massage the dark subject matter of the songs though. Midwest Farmer's Daughter's opening track Hands Of Time talks of her father losing the family farm when she was a child and her losing a son, Weekender tells of a weekend she spent in jail and the b-side Desperate And Depressed recalls a tour of Florida where she hit rock-bottom in her quest to get her music heard. It feels like these songs are a form of catharsis as she draws a deep breath at the end of Hands Of Time and tells us she's a reformed woman at the end of Weekender.

Half of the set is compromised of Margo and The Price Tags' interpretations of classics such as Loretta Lynn's Rated X, Billy Jo Shaver's Black Rose, Gram Parsons' Vegas and Levon Helm's Poor Old Dirt Farmer.. Each of them is given a fresh, vibrant makeover and adapted to match the style of the self-penned songs so the transitions are almost seamless.

The audience response to each and every song is ecstatic. Whether it's the ladies at the bar she dedicates breakthrough single Hurtin' (On The Bottle) to or the gentleman down the front lost in his own world when she covers Vegas, there isn't a single person with arms raised demanding an encore and then saluting them as they finish with a cover of Neil Young's Old Ways which they make their own with some style.

This was a truly special performance from an artist with an irresistible stage presence that it's impossible not to warm to and with a set of songs, both her own and her choice of others, that she and her band deliver with both immaculate precision, but also with an energy and excitement that draws the audience in and holds us captivated in its spell.  Anyone who reads this site knows we don't feature country, but after this gig we might just start. Next time round Margo will be in halls much bigger than this if tonight's response is anything to go by.

Margo Price played Gotta Travel On, About To Find Out, Tennessee Song, Black Rose, Hands Of Time, Weekender, Paper Cowboy, It Ain't Drunk Driving, Dirt Farmer, Swarmin', Since You Put Me Down, Four Years Of Chances, Desperate And Depressed, Rated X, This Town Gets Around, Vegas and Hurtin' (On The Bottle) with a cover of Neil Young's Old Ways.