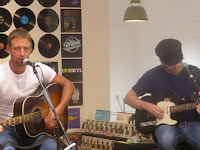 The Rifles' new double album Big Life is their first in two and a half years and as part of the promotional cycle for it, Joel and Luke played a short seven-song acoustic set at Manchester's HMV store on Tuesday night.

They start naturally by playing five songs from the new record - opening with the almost title track Big Big Life and following it with Radio Nowhere, Turtle Dove, Go Do What You Like and Victoria (a song that appears on the record in both electric and acoustic form).  They're on good form, their broad London accents sounding weirdly out of place in a Manchester record shop, but there's an obvious bonhomie between them and their fans, quipping about someone's Rage Against The Sowing Machine t-shirt at the front or telling us it's the first time that they've played Turtle Dove since they recorded it.

Fans of their previous albums will be delighted to hear that they've not changed their approach too much, The Rifles excel at three-and-a-bit minute songs that don't deal in pretense of being something they're not. Classic song structures and intelligent and observant lyrics which people can relate to is why they've gathered a loyal following over the decade or so since they burst onto the scene and Big Life continues that tradition without ever sounding stale or as if they're recycling. Our pick is Victoria, a beautiful paean to a love lost, that leaves us with the image "Victoria, where did you go? The lights are still on in the street where you live but nobody's home" 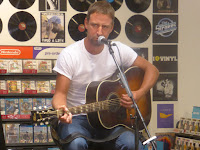 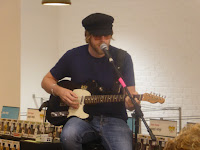 They finish with two old songs and they're inundated with requests from the fans congregated down the front. "It only has one chord" is their response to a shout for Out In The Past, but that's underplaying the songwriting craft of the band massively. Similarly their final song Rock The Boat, which laments the lack of people writing classics along the lines of Hendrix, Floyd and The Beatles, they inadvertently position themselves as a band that, whilst they might not have the visionary impact of those artists, are upholders of that faith, of the desire to create something that's timeless and that people will return to again and again.

After the set they spend time signing copies of Big Life and having photos taken with their fans. Strangely there's no Manchester or Liverpool show later in the year in current schedules to hear the Big Life songs in full band electric format as these acoustic teasers whet the appetite.

Email ThisBlogThis!Share to TwitterShare to FacebookShare to Pinterest
Labels: The Rifles