Ryley Walker - Golden Sings That Have Been Sung 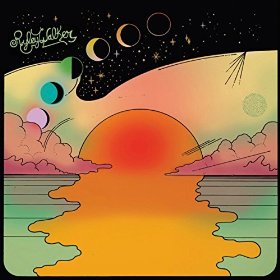 Golden Sings That Have Been Sung is Ryley Walker's third album following the underground successes of debut All Kinds Of You and last year's follow-up Primrose Green. It's an album that captures, as much as can be, the essence and spirit of Ryley's intense and thrilling live shows. The press release describes it as a coming of age, we'd go further and describe it as his masterpiece.

Golden Sings sees Ryley in reflective mood as most of the songs on the record were put down as he finished a gruelling stint of touring Primrose Green and with a heavy rock and roll lifestyle taking its toll. He recorded the album back in his adopted home town of Chicago with Wilco multi-instrumentalist LeRoy Bach and the scars and battle wounds of that tour cycle are writ all over the album. What this means though is that Golden Sings is the closest he's come so far to laying down that wild raw improvisational spirit that makes his live shows unique and such a joy to behold. We'd witnessed most of these songs at a last-minute solo show (due to Danny Thompson's illness) at the Band On The Wall back in February and this record is no disappointment.

What Bach's production brings to the album is a sense of space. The instrumentation is very clear, crisp and you can hear every subtlety in both the music and the world-weariness in Ryley's voice as he lays into himself of the opening track Halfwit In Me, reflecting on his tendency to "stay out all night" but it's when the song turns into what feels like a beautiful improvised jam that feels both incredibly simple yet unfeasibly complex at the same time that it really blossoms. A Choir Apart is much shorter, but no less impactful, starting with almost tribal shuffling drum beat and again the richness and depth of production captures every little intonation in the voice.

The opening to Funny Thing She Said merely emphasizes this, you can hear the whispering brush of the drums, every depression of the piano key, each quiver in Ryley's voice as he picks over the bones of a relationship. Its sparsity heightens the impact of every word, the pathos, the mind racked with doubt that's being pored over is laid bare for everyone to view - "I'm no meadow, there's no water to drink". It's music at its most powerful and emotive.

Sullen Mind is another song that lasts over six minutes but every single second feels vital to its impact. It starts off slow and builds to a frantic frenetic climax without even losing that clarity that allows us to appreciate every single note and envisage Ryley in front of us, head down, hair shaking playing it live.

Next up is the album's shortest track I Will Ask You Twice which opens with the line "I played footsie with Jesus, man what a weak touch, I don't read the Bible baby, I don't think it says ask much" and the rest of the song feels like a conversation with no one in particular other than the punch line "will you marry me baby? I will ask you twice" to just an acoustic guitar.

The album's lead track The Roundabout focuses on Ryley going back to his old neighbourhood and seeing how it's changed, reflecting on his lot - "I'd buy you a drink, but my credit is quite shit so we can all laugh and drink tap water"- and his life, after referencing a friend thinking he's having a daughter with the line "come to think of it, my Dad wanted a daughter." Like in real life, Ryley's music lays everything down in front of the listener, an open heart and soul that you sense hides troubles behind the smile that greets you every time.

The Great And Undecided is another lament and a very critical self-assessment, the great and undecided of the title being an reflection on lost opportunities, of what might have been that concludes with the honest declaration of being in the wrong as the other party to the story "moved away to keep a distance, that's kind of nice because I like it here, I was the great and undecided, hold a candle to where the light is."

The start of Age Old Tale might feel like unfocused noodling at first, but again the crisp clarity of every note manages that neat trick of setting the listener's hairs on end before Ryley even utters a word over two minutes in and the lyrics, like so much that's gone before, feel like a stream of consciousness rather than something that's been sat down and pored over to get just the right impact. And that, like the music, is what makes Golden Sings such an outstanding record. It's by far the closest that he's come to replicating his live shows, although he doesn't help himself in that regard by including a forty minute (yes, you read that right) live version of Sullen Mind on the Deep Cuts version of both the CD and vinyl of the album.

At some point down the line, Ryley Walker will be recognised as a musical genius. Golden Sings is the complete antithesis of what major record labels and radio stations look at to turn over figures and listeners and, for those not familiar with Ryley's previous work or live shows, it will be a slow burner, a record that, despite the small number of ingredients, reveals some new detail every time you listen to it and one that you will return to time and time again in dark reflective moments, late at night when your mind is racing and music is your own companion.