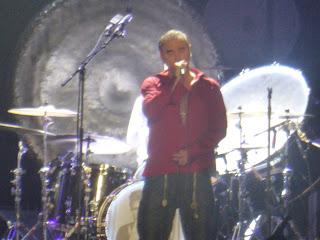 It was a gig that many thought they wouldn't see again, a gig that many fear we won't see again if all the rumours are true about Morrissey's health, but 16,000 of us from far and wide packed into the cavernous arena to pay homage to Steven Patrick and in true inimitable Morrissey style he didn't play by the rules and delivered a set full of curveballs, direct and indirect messages and left us streaming out with a smile on our faces by finishing by one of his best-known and most-loved songs.

We eventually made our way in after queuing for ages on the steep stairwells of the MEN that somehow pass the health and safety regulations of our council as the strains of the New York Dolls belted out and echoed off the walls off the concrete mecca to corporate sell-outs that accompany such large audiences. The fact that a boy from Stretford, thirty years past his commercial peak, whatever that is, can sell 16,000 tickets in minutes is a triumph of the outsider, of how this matters to people, and to some extent, how those that want one or two songs can be easily parted with seventy five of the queen's finest pounds.

A big crescendo of drums is drowned out by the raw as the band enter the stage followed by Morrissey and they strike into Suedehead, which may throw the audience the curveball of expecting a greatest hits set, but the whole place goes wild and there's a reference to taking a look into his Stretford gloom, the first of many references to his hometown throughout. He's dressed in a smart black jacket that hides a blue shirt underneath open almost to the navel, which he needs as the Arena feels like a sauna. 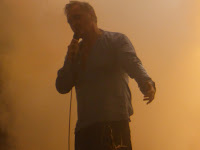 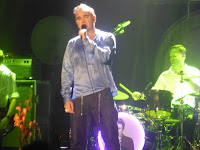 Unlike so many Arena gigs he's insisted on little separation between performer and audience so on Alma Matters he can reach out and hold hands with his faithful that started queuing this morning just to get up close and personal. It's a rarity these days that such devotion happens, but he still manages to inspire it long after what the insiders and the cool people consider to be his prime. Tonight these songs, and not just the big ones that his former colleague Mr Marr trots out to get the singalongs going, mean the world to people in here, whether they saw him at the time or whether they're just discovering him.

He announces himself as the new Lord Mayor of Manchester, a subject he'll come back to later and declares that there's so many songs and so little time. We finish a good three quarters of an hour before the venue's curfew, but after over an hour and a half it's the longest Morrissey gig we can recall. We link arms with complete strangers to bellow out All You Need Is Me, because these words mean the world to the people in here, even the songs that are less well known.

Ganglord is accompanied by shocking videos of police brutality on the big screen behind the stage, a sign that whilst some of the other bands of his generation might reform and take the money and conform that he's not going to because he doesn't need to. Speedway and Istanbul are similarly choices that wouldn't top a poll of the paying punters to be paid but which deserve to be heard and not lost in a repeat loop of Bona Drag and the subsequent Best Of compilations. We are far enough back that this does kill the atmosphere a bit around us, but we just move to those that care and are willing to wrap their arms around total strangers and lose themselves in the music.  On the latter, a stage invader evades security and plants a kiss on Morrissey's forehead before being led away, hopefully to be let back in the back because that's what should happen.

"Sportswomen don't start world wars, hairdressers don't start world wars, cows don't start world wars, badgers don't start world wars, politicans start world wars and they love it" is the introduction to the title track of the recent album World Peace Is None Of Your Business that is sadly underrepresented tonight, but it starts with a weird didgeridoo sound before making the statement loud and clear that there are "new ways to run the world", the telling entree into Kiss Me A Lot that sees grown men of the very heterosexual variety wrap their arms around their friends and kiss them on the cheek or lips. Such is the power of the man. The song itself is stripped back, acoustic guitar being played from behind the rack of keyboards, but almost drowned out when it hits the chorus by the sheer weight of people singing back.

A simple French Tricolore fills the huge screens behind the stage for Throwing My Arms Around Paris, a discreet and wholly appropriate response to the things that have happened to that fine city since the song was released. Its poignancy now stretches from more than the personal to the global and the audience respond in kind. At the end Morrissey apologises for how he looks on the big screen before quipping that he usually doesn't look this bad, he usually looks much worse, a dig at the health rumours that seem to be following him around. 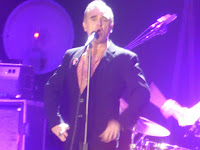 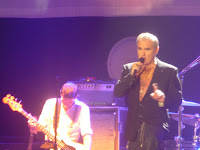 Ouija Board, Ouija Board is an interesting choice and there's a moment where he stands arms outstretched, uttering the words "I do still feel so horribly lonely" and you feel he might just be thinking that as he then clenches his arms close to his body for the rest of the song. Suddenly the Arena feels incredibly intimate.

The recent discussions about the Manchester Lord Mayor position crops up again as he declares that Andy Burnham has already been elected and he questions whether he's been asked, or whether we have too, and that we could probably have found someone from Manchester rather than Liverpool to do the job. He somehow manages to throw the line "quango, quango" into Everyday Is Like Sunday as if to make his point, although the Arena is so engrossed in the song by this point that they might not realise.

In a world where bands are reforming and taking the money, you have to feel that might never happen with The Smiths and when the next quarter of an hour is taken up by a vitriolic rant at Spain and a very clear "fuck the farmers" message in The Bullfighter Dies and then in a long drawn out Meat Is Murder that's accompanied by a barbaric video of the methods used in Halal slaughterhouses and references to KFC, you sense this isn't a man prepared to take the money and forget his principles. The lyrics get changed to reference "not me, why should I care, too fat to care" as an animal is put through a torturous process on the screen behind him and as a lamb's dead body fills the screen at the end of the song, a message in simple black and white comes up that says "Meat Is Murder, what's your excuse now?"

Keyboards lead into the next song and Morrissey kneels facing his drummer as suddenly the stage explodes into light for the opening lines of It's Hard To Walk Tall When You're Small, a song missing from recent sets and another curveball thrown away from the more predictable songs that could have filled the evening. The stage is then filled with menacing smoke as the opening bars of Jack The Ripper strike up and through the song he introduces his "finest platoon from here to the moon" of Adrian, Gustavo, Jesse, Matt, Mando and his old sparring partner Boz Boorer. 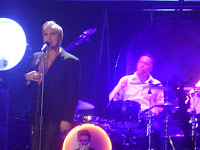 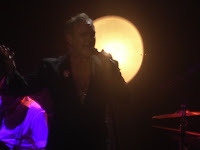 Still not afraid of making his political and social point, This World Is Full Of Crashing Bores is played out to images of William and Catherine filling up the big screen at the back of the stage. At the end we're told "you're a bit tired now, so we'll stay till you wake up" and I Will See You In Far Off Places sees him shake a mean pair of maracas.

There's been a noticeable absence of Smiths songs so far other than Meat Is Murder, and whilst Johnny Marr, as is his absolute right as co-writer of some of the most magnificent songs of a generation, is happy to roll out There Is A Light That Never Goes Out and turn it into a communal celebration, the awkward bugger Morrissey is concludes with the fabulous but obtuse What She Said which merges into the equally angular Rubber Ring. No one particularly cares for such observations though as the whole place goes wild.

Morrissey then talks about those we've lost to the grim reaper this year - Victoria Wood, Caroline Ahern, Muhammed Ali and Prince ("too soon, too soon, too soon") - and dedicates it to them which is particularly poignant with the line "all the best ones are dead." It's not an obvious set closer, but then tonight this wasn't a particularly obvious or simply crowd-pleasing arena set that some bemoan on the way out without understanding what he's really about.

He comes back for an inevitable encore, and as ever it's just the one song.  He declares that he wrote a song years ago and now it's 2016 and it's come true that England is sick to death of Labour and Tories and that whatever happens he loves us. The whole place erupts for Irish Blood, English Heart and minor setlist quibbles are forgotten.

This might be the last time we see Morrissey in Manchester if any of those rumours about his health are true or the issues with record labels means there's no new music forthcoming or if he takes a dislike to the future elected Mayor and on principle refuses to come back again. If that's the case his final show would be remembered like him, a man who sticks by his principles, doesn't take the easy route and plays the game, but does what he wants when he wants yet still retains the messianic adoration of his followers.  God bless you Steven Patrick.

Morrissey's official Facebook page can be found here, but the real stuff happens on his friend Julia's True To You site and then there's the Morrissey Solo website which is an interesting place to read.

Email ThisBlogThis!Share to TwitterShare to FacebookShare to Pinterest
Labels: Morrissey