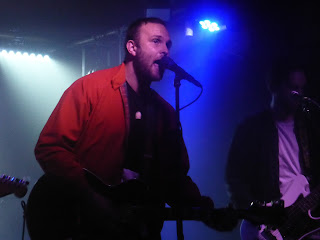 2016 must feel like a year of life on the road for Billy Bibby and his band The Wry Smiles. He knows that constant touring is the one way to build an audience unless you have major label backing and he's certainly putting the hours and miles in. We caught up with him armed with a set of new songs to back up his debut EP at the Night And Day in Manchester on Friday night.

There's an expectant buzz around the Night And Day as the seemingly endless intro music dies down and Billy makes his way to the stage with Matt, Mike and Rob and they launch into opening track Always Something. Like most of his songs, it's made for bigger rooms and stages than this, you can feel the powder keg of the bass drum building the song through the verse to the explosion of the chorus. These are a set of big songs, crafted by someone well briefed in the art of creating songs that draw you in and make you part of them from a past life.  They're simple, because sometimes the simple things are actually the best, you know what you're getting, but you'll hang your hat on it, nail it down and then lose yourself as you let it take you over.

The set's full of such songs, whether it be the four tracks from his debut EP that are aired tonight (Don't Fall, This Kind Of Summer, Waitin' For You and Believe Me) or the newer material that packs something of a harder punch. They feel instantly familiar but they never feel like they're repeating themselves, there's even a little bit of an Elvis Presley feel to I Got A Woman. 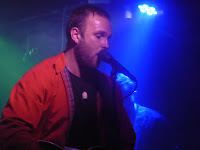 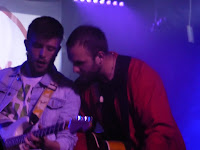 He does save the best for the end though. Future single Substitute feels like a very big upping of the game, a song that will reach out of radios and grab people by the throat and make them listen. Anthemic, powerful yet retaining a little intimacy too, it's a big statement that Billy isn't happy to just keep playing the same venues over and over, but wants something bigger. Even that's topped though by God Gave Her Soul which sees audience members on each other's shoulders and, as the song reaches the breakdown, a hundred or so sets of hands raised clapping along before the band let loose in a frenzy of noise to bring it to a close.

What's also impressive and very noticeable is how much fun the band are having too. Matt, Mike and Rob are not overawed at all by Billy's history as can so often be the case when someone from a big band moves on and starts anew. They're energetic, vibrant and you can sense the camaraderie and the musical chemistry between them throughout as they laugh and joke their way between song, and that's essential as it transmits to the audience as well which means we leave the venue with as big a smile on our faces as they do leaving the stage.

Email ThisBlogThis!Share to TwitterShare to FacebookShare to Pinterest
Labels: Billy Bibby And The Wry Smiles