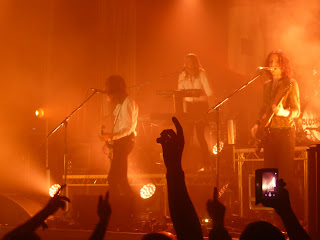 A midnight album launch in their home town of Stockport where all of Blossoms come from, where they were born just up the A6 in Stepping Hill, just past the pub on the corner that gave them their name and whose Welcome To signs now state Home Of Blossoms is pretty much the perfect way to send your debut record out into the world. A feverishly expectant home town crowd were treated to the album being played in order with four songs being played to a live audience for the very first time. It was the dream homecoming that the band had planned for over a year for the release.

Dantevilles opened up and, apart from a few sound issues on the first song (wholly understandable as this is the first live rock show in the Plaza for years if not decades) that are quickly resolved deliver a set that confirms their burgeoning potential. Whilst there's disappointingly a few empty seats (something that they'll hopefully rue like those that missed Blossoms opened for the likes of James, Inspiral Carpets, Courteeners and The Charlatans) they don't care and deliver a set that fills the room and gets people dancing in their seats. Some bands shrink when placed in a big room like this in front of a new crowd, but, if anything, you can feel them growing especially towards the end of the set when Sea Of Change and It Might Be Tomorrow fill the place and make it their own. 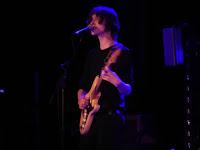 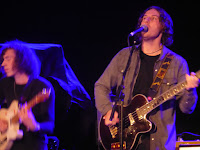 Their dual lead vocal line of attack from Jamie and Connor isn't a new one, but there's an intuitive understanding there that means they pull it off incredibly successfully over songs that give them the space to deliver songs that will, with a fair wind, gather the same attention of the early work of the headliners.

It isn't their night though and after we're entertained by Josh's dad Robin, a virtuoso pianist, playing both classics and a couple of Blossoms songs for good measure. Then the strains of Frankie Vaughan's ode to the town "I'm Going Back To Stockport" is the perfect introduction to the band who come on stage holding their big I "heart" Stockport flag. The Plaza is a wonderful building, a classic old school theatre. Rip the seats out and make it a full time gig venue please.

They get the civic pride spot on tonight as well, there's none of the predictable forced chanting that you often get across the hills from here, but you know they would rather be nowhere else in the world tonight. Tom's "Good evening Stockport, we are Blossoms from Stockport" bringing the biggest cheer of the evening other than the dedication to the boys of Viola Beach and Craig Tarry, who they may have the strange feeling of displacing from the top of the album charts this time next week.

It's four months since we last saw Blossoms, the longest since we first saw them, a world away and a completely different band in Sound Control back in January 2014. They've been across Europe in that time and blown away audiences across the festival circuit, but boy have they grown as a band. Front man Tom Ogden in particular has morphed and become a band leader with the between song talk to match (starting with "I don't mean to come over all Keith Lard" when telling the audience that pyros will see them taken off stage with no comeback) and I don't think his voice has ever sounded better, the new songs showing a depth and a warmth to them both live and on the record. 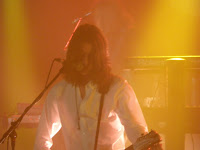 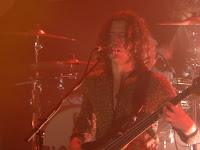 They play the album in order, which means they start with Charlemagne, At Most A Kiss and Getaway, their three most recent singles, and the ones that cemented their place in the hearts of the youth and not so young of the nation. The seats might prevent the chaotic scenes that were witnessed at the Albert Hall earlier in the year that will no doubt be amplified in the Academy in six weeks time, but they can't hold back the love and mutual adoration. Times might be shit in the North West at present, but Blossoms' rise has injected hope to any band striving to make the top and brought joy and love and reinjected civic pride into a oft-derived town. Their formula is simple - write great timeless songs that will appeal to anyone and everyone, embrace your influences, play them like you mean them and love and remember your friends and family along the way.

Some of the new songs already feel like old friends. Honey Sweet and Smashed Pianos wear their big Blossoms rosettes on their chest, but have personalities of their own like every single song the band have put out. Texia is destined to be a live favourite and is one of the highlights of the set, a big driving momentum runs through it whilst Onto Her Bed sees the rest of the band leave the stage and Tom beg our silence for three minutes where the album takes "a little left turn, just off the A6", another cultural reference point.

My Favourite Room, with Tom playing solo acoustic, is dedicated to a lad in the audience who's recently been dumped, completed with pantomine awwww, and the names of him and his ex blended into the song as well as sections of You're Gorgeous and Half The World Away as he did at the Albert Hall back in February. Its poignancy is eclipsed by Blown Rose though, a simply beautiful version of the song that's both uplifting but also with that bruised very English romanticism running through it. Tom tells us the song was written on James Skelly from The Coral's acoustic guitar at the end and you can see the family line right there. 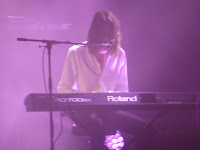 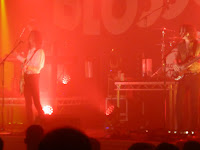 Cut Me And I'll Bleed and Blow (dedicated to everyone at the sadly lost Blue Cat Cafe in Heaton Chapel just two years ago), their first two proper singles, and the main set and album closer Deep Grass show that Blossoms haven't stepped away from their songs with the darker, more psychedelic edge to them. The latter in particular could be a pointer to a future direction away from the radio friendly recent singles, but Blossoms' magic is that they can jump from one place to the next and back without breaking sweat or being ruffled, other than the wind machine that plays havoc with Charlie's flowing locks.

There's no way we're going to let them go without an encore. They huddle to decide what to play and Tom tells us they've been writing new songs and they're going to play one. We're not so secretly disappointed when they strike up into Charlemagne, because it wouldn't have surprised us if they had, but they made the right choice as the whole place goes wild once again.

This is how you do album launches. Play the whole thing, do it at home in front of your friends and family, make it a celebration and make it a night that will live long in the memory. The sound's perfect and so is the setting, even down to the detail of creating a programme as if it's an old-school theatrical production. Blossoms have spent two years creating those memories and with every passing show or release, they are still getting bigger and better and they've still got their feet planted on terra firma.

Blossoms might love Stockport, but the rest of the country loves them back.