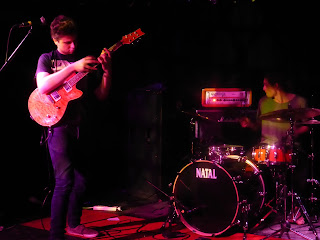 Floral are an American duo specialising in instrumental math-rock, just guitars and drums and no trickery involved. They've just kicked off a UK tour and we caught them late on a Sunday night at AATMA where they demonstrated on many fronts why less is something more.

Twenty minutes is all Floral give us, but that's all we need. One of the issues we normally have with instrumental music is that it can go on too long, get dragged down in the love of music of the musicians and it becomes a case of showing off and ultimately can become boring. Floral feel as if they're savvy to this and focus on the raw materials of rhythm and original time signatures in pieces of music that don't break too far past the three minute mark.

Visually we're absorbed just by watching Nate's hands work his magic on his guitar, using the full length of it at times during the same piece of a song, fingers almost a blur as he delivers sounds that mere mortals would struggle to coax from six strings with all the time in the world. The rest of the audience is similarly transfixed by this as the seven pieces they perform all sound very different, but remain true to their principles. Ty on drums provides the framework for Nate's string-led magic to do its work and there's a real intuitive sense between the two of them that really glues everything together even when they're not looking at each other. 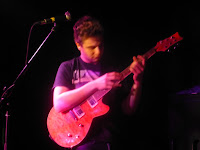 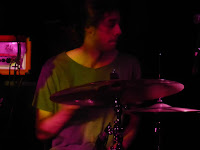 They don't say much, they make a joke about both having had a nice poo earlier unlike someone in one of the support bands (we obviously missed a story) and that Americans have to be loud to be elected as they thank everyone involved in their show.

Floral's music isn't our normal thing as we were there on the recommendation of a mutual associate in San Francisco, but we went from being unsure as to what to expect to being very impressed not just by their music, but by the fact they finished leaving us wanting more whereas an instrumental set can often leave us glancing at our watches wondering how much longer it'll go on.

Email ThisBlogThis!Share to TwitterShare to FacebookShare to Pinterest
Labels: Floral