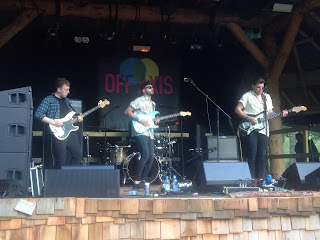 The sun was out, the crowd was ready, the stage was nestled in a picturesque forest. This really was a magical combination that just needed a band who could draw it together and create something memorable. And The New York Tourists did just that!

The Blackburn four-piece consisting of Gary Taylor on vocals and guitar, Carl Rutherford on guitar, Joe Mooney on drums and Adrian Mckenzie on bass guitar were clearly in no mood to just appease us, they had every intention to get us moving.

From the moment they stepped on stage it was blatantly obvious they were ready and excited to deliver a sterling high energy set that would have the audience bouncing along.

This alternative no nonsense band have been described as cross between Queens Of The Stone Age and The Foals, having enjoyed positive reviews across the industry and having giggled extensively since their 2013 debut, with some credible support slots. I was curious to see them in their own set, stand alone.

Opening with the guitar laden Fools, hitting hard with an authentic energy, they continued to keep the tempo up and at no point wavered either in tightness and delivery or indeed in power.

The crowd was relatively small at the opening and it was easy to see how the numbers of passers by were drawn in, to not just watch but to get stuck in and dance along. By the 3rd track in, Two Heartbeats, there was standing room only and those sat on benches had no choice but to stand and get in the mix.

The heavy spot on rhythm underpinned some sublime and dirty guitar riffs. This combined with unfaltering vocals from Gary, even during Call which has some difficult notes and arrangements, begged the question why are The New York Tourists not playing much larger stages? The answer I’m sure will be addressed very soon as this band do not fail to deliver live, both in terms of technical ability and energy. Combined with a genuinely humble but playful interaction, you can't help but be endeared. They had the audience mesmerised, more so than some of the more established well known bands who had played larger tents earlier that day.

Closing their eight track set with Dead Man's Leather, I couldn’t help but want an encore and to know exactly when they are playing next, which to me indicates a band that have done all that's needed to secure an ever-growing follower base.

A rousing applause and a very large crowd literally mobbing the band to buy their new CD speaks volumes when that crowd is made up of hardy festival goers who by and large know their music!
You don’t need to be hanging out with thousands at the front of a main stage to enjoy a memorable band as this proves, often the real action goes on at festivals away from the main stage.

The New York Tourists album You and Me is available to purchase now via iTunes and they play Manchester Academy 3 on September 10 as main support to Delamere's album launch.

Wendy Smith broadcasts from 7pm to 9pm on the C120 Show With Wendy and Louis on 106.6 North Manchester FM