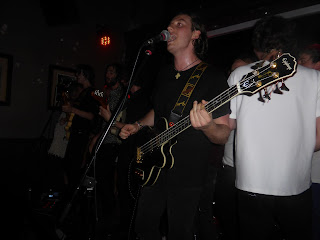 Dantevilles started off the biggest week of their career to date with their own packed-to-the-rafters show in the music room of Manchester's Castle Hotel. Their seven-song set pulled no punches but packed plenty of them as they tipped the room from boiling point into the chaotic meltdown of a stage invasion at the end.

Manchester bands are noted for their attitude whether it be justified or badly mis-placed. Dantevilles are one of the newest set of kids on the block and they're not afraid to shout about where they're from and where they're at, but there's something different about them that's making them stand out increasingly from the pack. Perhaps it's the way that Jamie and Connor interchange or share lead vocals flanking Paul in the traditional front man spot in the middle or the way drummer Cory mouths along to every word. Or in the fact that whilst they wear their love of the musical heritage of their hometown on their sleeves, they don't just simply try and rehash or recreate past glories, but aim to create some of their own. Their most recent single Perfect Place is unmistakably Mancunian in its outlook, but has a very much universal appeal.

For a band so early in their life they're already a quite formidable and together live band, that instinct that friends who form a band naturally have rather what those thrown together by circumstances have to find. They find fluid rhythms and grooves in each of the songs they play, the sort that stick in your head, the sort you'll find yourself singing along to on the bus, Sea Of Change being a case in point.

They're not phased by a photographer who spends most of the gig sticking a camera and flash in their faces or the stage invasion for their final song It Might Be Tomorrow. That song was one of the first they released, but it's surely going to play a massive part in their push to reach the same level as their mates Blossoms who they're supporting at their Stockport and Manchester launch shows this week.

As we leave the room, there's a real buzz to the place, the sort that you get when it feels like the start of something and when you know a band is going to do something special.