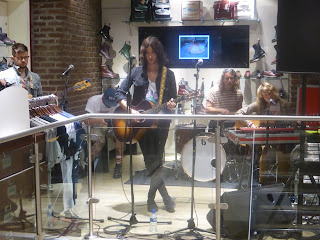 As part of Dr Martens' Stand For Something campaign they partner up with bands and recently they've linked up with Cupids cumulating in a hot and sweltering in-store set last night in their Market Street store. Ever adaptable, Cupids performed amongst the boots and shirts to a crowd that had packed in from the street to catch them in another unusual setting.

Their six song set once again demonstrates their dexterity and versatility as musicians with Jake and Sid switching between acoustic guitars and keyboards. It also shows that the set of songs that they've written since they reinvented themselves last year are the strongest of their time together. Each one feels like a perfect single - whether it be the politically charged No One Talks (and they seem to be the only angry young band making these points these days) or the social commentary of on-your-uppers closing track Money - the songs are constructed in such a way as to immediately embed themselves in your head, but at the same time be far more than a one trick pony because of the way they use three-part vocals at points (including bassist Ryan). 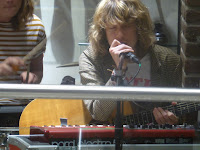 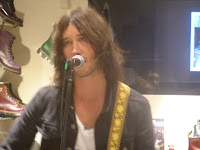 Springsteen once made a statement that every member of the E-Street Band were talented enough to front a band in their own right, something that Tim Booth of James picked up on and quoted regularly in interviews around the time they broke big in 1990-1.  That equally applies to Cupids, their biggest problem might just be reining all that in, but at the moment they're doing just fine. New song Hope It Never Ends already feels like an old favourite, whilst Heaven Knows Me Now, recent single Kickin In and, in particular, Good Things show that they've got no end of songs ready that will sweep you away and make you love them even more.