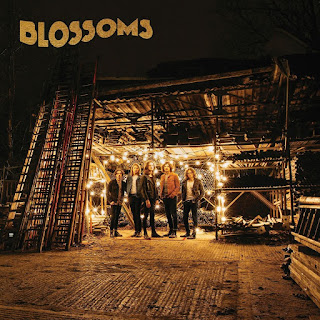 Blossoms' debut album has been one of the most anticipated release of 2016. A series of singles through 2015 and 2016 has whet the appetite and turned them into the band most likely to be the next big breakthrough and their self-titled debut is served with the role of cementing that position and winning the hearts and minds of many more. Laced with those singles and backed with a set of songs that show off a more diverse side to their work, Blossoms have delivered what is likely to be regarded as the best debut album of the year.

Blow, Cut Me And I'll Bleed, Blown Rose, Charlemagne, At Most A Kiss and Getaway already reads like the tracklist of a greatest hits album for a band years if not decades into their career. The fact that Blossoms have released all six of these, plus their debut You Pulled A Gun On Me, in less than two years demonstrates that we're not dealing with a run-of-the-mill indie band here. Add to that the list of songs that were destined to appear on the EPs that accompanied those singles - Madeleine, Smoke, On The Beach At Night, The Urge, Polka Dot Bones, Fourteen, Wretched Fate to name just a few - and the ones that have escaped into the wild unreleased - Scattered Rain, Goodbye, Come Sunday - and you have the picture of a band that's both prolific, not afraid to vary their sound and which wants their work to be viewed as a body rather than just be remembered for one or two big singles.

Where Blossoms stand out from the crowd and what gives them their universal appeal to all ages that the likes of Catfish and The Bottlemen and The 1975 don't possess can be traced back to their influences. Spend an hour at one of their DJ sets and you'll be taken on a trip through pop music from the 1960s to the 1990s and this is writ large and loud across Blossoms. There's a pinch of glam rock in At Most A Kiss, that unmistakable riff that runs throughout Charlemagne and the timeless romanticism of the guitars and Charlie Salt's backing vocals on Getaway and Blown Rose. Cut Me And I'll Bleed, Blow and the album's closing track Deep Grass still bear their psychedelic tendencies loud and proud and Myles' organ has a lingering Doors feel to it, but James Skelly's magic production dust and musical brain reins this in and gives us the best of both worlds.

Of the songs that will be new to avid Blossoms fans, Honey Sweet is set to a swirling chiming electronic beat that kicks in and out of the song at just the right moments. Tom Ogden's lyrics deal mostly with simple themes, relationships (although with the number of girls names in the songs, you wonder if they can all be personal). Onto Her Bed feels slightly claustrophobic, shrouded in atmospherics pierced only by shards of keyboard and layered vocals. It breaks the pop spell for two and a half minutes.

If any balance needs restoring then Texia and Smashed Pianos both do that and then more. On the former, Tom's voice has angelic qualities that dance tiptoed over Myles' shimmery shiny keyboards; it's unfeasibly optimistic, upbeat and positive even when Josh's guitar solo is let loose over the middle eight. Smashed Pianos starts off all echo-laden around Tom's voice before Joe's drums kick in and then the song bursts into beautiful life as Tom declares "I can't switch off and on like you do, think it's something I need to work on."

Of the previously unreleased tracks on the record, My Favourite Room is the only one that'll be familiar to those who've attended shows over the past couple of years. It's done simply, just acoustic guitar for large parts of it in contrast with the glamour around it and it feels perfect without any unnecessary adornments. Its family tree probably has a branch labelled Nothing Ever Lasts Forever, but it need not shirk in comparison with that Bunnymen classic such is its simple poignancy.

Deep Grass concludes the album and clocks in a minute longer than anything else on the record. It'll delight those that might have turned up their noses at the more polished side of Blossoms that's very much to the fore on this record. In parts the production very cleverly makes it feels like it's been recorded on pretty primeval kit, but that's part of its magnificence, particularly when Josh lets loose as the song moves to its conclusion.

With expectations so high and Blossoms having cast their net far and wide with the variety and the high standard of the songs that accompanied the singles on the EPs, it was always a possibility that the album could be an anti-climax and, like all records where you know every beat and every word of half the songs before it comes out, there's definitely a couple of listens where it naturally feels a little weird, but those thoughts disperse very quickly and the new songs feel like you've known them all your life. Whilst the delicious piano ballads and the harder psychedelic edged songs might have their day on future EPs and albums, Blossoms is very much their pure pop masterpiece and will only accelerate their unstoppable rise to the very top.