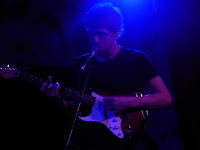 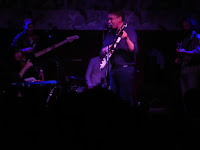 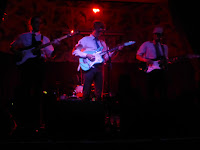 Kiran Leonard's five date tour in support of his album Grapefruit rolled into Manchester's Deaf Institute on Thursday night. As ever, his live show left the packed crowd stunned by the intensity and ambition of the performance that marks him out as one of the our most unique and inventive creative talents.

Opening up proceedings are four-piece DUDS and they're in no mood for hanging around. Each of their songs lasts around two minutes and are sharp, angular stabs at the heart of raw metallic sounds. Vocals are shared between two of them and their drummer, dressed in a suit and shades, smashes his kit into next week such is the ferocity of their performance. There's a couple of songs from their Unfit For Work EP, but the other nine or ten songs that they cram into their half an hour are new and they each have their own method of sonic assault. A great opening act, they warm the crowd up perfectly for what's to come. 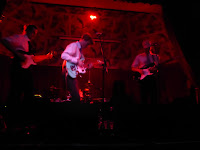 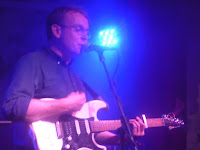 Secret Admirer is the side project of Former Bullies front man Nick Ainsworth and after an amusing interlude while we wait a few minutes for his drummer to turn up, he charms us with a set of songs from an album called Life's Long Road that he's selling at the gig. The highlight for us is the opener on that Perfect Specimen, but the whole set and the interaction between Nick and his band and the audience (at one point we unplug the smoke machine for their allergic keyboard player / violinist) is a lot of fun and

Kiran opens up with Pink Fruit, the song that might have attracted some of the audience as it was a favourite with Marc Riley on 6 Music (who's here in the audience), but tonight we're treated to the full sixteen minute version, completed with slowed down solo middle section and the part when Kiran completely loses himself in the song and it's hard to hear what he's singing over the cacophony that his band are creating. It's not easy listening, but it's absolutely compelling, like a collection of movements in a symphony with only the loosest of connections.

Things are almost derailed by a buzzing amp or monitor that distracts Kiran, although most of us can't really hear the problem, but as a perfectionist it needs addressing before they continue. Ondor Gongor is next and is as wild and as unpredictable and the audience aren't quite sure when to clap at the end of the song. Some look bemused, not expecting this intensity, others look absolutely engrossed and captivated. 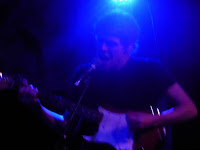 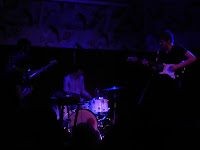 The set focuses heavily on Grapefruit with an occasional diversion. Don't Make Friends With Good People moves from half-spoken / half-sung almost peace to a wild frenzied section without pausing from breath. It demands attention in a world where an average audience's attention span is diminishing with every passing and as demonstrated when Secret Police finishes and no one claps immediately because they're unsure as to what's coming, it's hard to tell exactly what Kiran is going to do next.

His debut Bowler Hat Soup is represented by Port-Aine and it feels restrained in comparison to what's gone before, but that allows Kiran to demonstrate that he can also master the simpler song structures that the album contains as well as the vivid soundscapes that he's conjured up on Grapefruit. The set finishes on a ten-minute song we don't recognise (which is actually Geraldo's Farm off Bowler Hat Soup) and which again takes us on a journey round the creative recesses of Kiran's mind although he does complete it with band introductions in the middle.

In seventy minutes we get just seven songs, but the ideas alone in those songs could probably fill ten times the number such is the astonishing creative mind that Kiran possesses, one that it's almost impossible as a listener to untangle and fathom other than standing and listening and seeing and hearing it unfold in front of you. This isn't light entertainment or radio friendly, despite the patronage of 6 Music, it's an experience you need to immerse yourself in to fully appreciate.