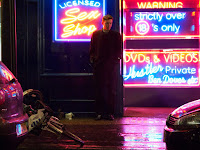 New four-piece One-Way Song came into being when a theatre group metamorphosed into a band as it became the the songs they were writing for a performance project seemed more suited to being performed on a stage and recorded and released in their own right. Their interesting back story becomes even more intriguing when you listen to the recorded output that they've shared so far.

One-Way Song was born from the Finn Youth theatre group as a trio of Luke Gilfedder, Angus Macalister and Danielle Roseler and they quickly brought guitarist Liam Power on board to complete the band that's been busy recording their debut album Passionate Leave. They stepped out of performing at venues like the Royal Exchange in Manchester and swapped it for the less glamorous surroundings of recording studios and the Night And Day where they previewed songs from the album back in July.

There's a dark, brooding drama to debut single When I Was Bully, a song that draws you in with a hypnotic electronic beat that underpins the song over which Angus half-sings, half-racontes leaving the listener hooked to both the music and the fate of the protagonist of the song. The theatrical links are very evident in the songs they've revealed so far and in their name which comes from a 1930s poem by Wyndham Lewis and there's plenty of literary references dotted around the three songs that they've revealed so far. They also promise that the album will contain songs about Nostradamus, Marseille, brutalist architecture and the Mafia. 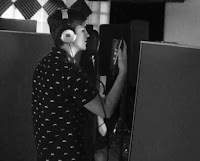 The demo of Take Me To Your Party is a little more sparse in its arrangements and structure, but Angus's voice again imparts not just a story, but creates an emotional tension that hangs in the air as the song moves forward. It's a work in progress as they complete the album, but it's very evident that the finished item will be full of such moments of rich story.

The band are currently putting the final touches to Passionate Leave, including a re-recording of When I Was Bully, at Studio Z in Hulme and Openshaw Campus studios and they plan to reveal more from it at two shows planned for later in the year in Manchester, an acoustic set at Zombie Shack on October 24th, followed by a full band set at the same venue on December 6th.