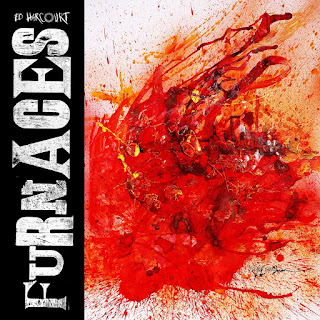 Furnaces is Ed Harcourt's seventh album of a career that started at the turn of the century with a Mercury Prize nominated debut. It's an album steeped in intellect and both political and social commentary and bold cinematic instrumentation and production. It cares not one jot for commercial appeal, jumps from theme to theme and style to style throughout, but still retains a continuity of purpose that makes it possibly his finest record to date.

The album starts with a solitary piano in the minute and three quarters Intro before the six-minute The World Is On Fire sets the tone pondering the state of the planet and the role that the human being is playing in its demise. "Gagged and bound by prophets, dragged kicking through the streets, no point in mourning for the future" articulates this resigned despondent world view to an edgy instrumentation that wouldn't be out of place in a film about the impending destruction of the world.

Loup Garou immediately changes the mood of the record, something that happens regularly throughout Furnaces without every throwing us off track, its "don't you know I'm a beast of a man" chorus deals with the way men change character at the flick of a switch, it feels like it's both personal (there's a legendary story from the early days of Ed's career that never got verified of him punching out a heckler at a show), but also a commentary on the male psyche in society at the same time.

That sense of a planet and race heading for self-destruction returns on the album's title track Furnaces with references to fracking and oil slicks and the fat cats lighting up cigars whilst presiding over a never-ending greed for profits with no remorse for what they're doing to the earth on which we live. Again, the production is very much wide-screen, ambitious and sonically challenging without ever slipping into bombast.

Occupational Hazard starts with a repetitive beat and a half-spoken, half-sung opening and continues the theme of human domination and lack of consideration for the rest of the living world - "Got you begging for your dearest life, I survive all the disasters whilst everyone around me dies." Things take a darker turn, lyrically and musically, with the opening of Nothing But A Bad Trip, which refers to reapers caressing hair with their fingers and the claustrophobic vocal-treated verse sets the listeners at unease as does the breakdown.

You Give Me More Than Love starts with a hypnotic loop that continues throughout the five and a half minutes with layers of additional instrumentation being added as the song progresses turning it into something more dramatic as Ed references Virgil and reflects that "the sweet taste of misfortune has led me to your door." It's optimistic in its outlook, but with a lingering unspoken sense of disaster around the corner.

A piano leads into Dionysus, a song that references throughout both wine and fertility, the two items in which the subject was the Greek God of. The song explodes into a whirlwind of rollercoaster emotions and continual changes of pace and it feels constantly like it's on the brink of falling in on itself, even on the umpteenth listen, and the fact it doesn't it testament to both the quality of Ed's songwriting as well as Flood's production.

There Is A Light Below is the most curious moment on the album, a call and response talking to himself vocal to an almost tribal beat before opening up into a chorus that's almost singalong, unheard of on the rest of the record, and then an instrumental middle section that goes off on another tangent.  All of it seems to miraculously fit together though.

Last Of Your Kind is the album's big anthemic track, making its intentions clear right from the start, the sort of song that for a fleeting time around the release of his third album Strangers and single Born In The 70s made him the darling of Radio 2. Of all the songs on the album, it's the one that turns itself inside out and there's a sense of optimism that love will conquer all despite the references to "standing on the edge of existence" and the themes across the rest of the record.

It's back to doom-laden drama for Immoral starting as it means to go on with "to be immoral, little bird let me suck all your bones, break every promise" in a falsetto that you wouldn't associate with such self-searching lyricism and which at times could divert the listener from the subject matter until the chorus comes crashing down like the collapse of the Roman Empire and leaves the listener floating downstream on its debris to the end of the song. It's powerful stuff.

The album closes on Antarctica, a song about escaping away from all the memories and the governments, all those internal and external struggles that have been referenced throughout the record and escaping to build a new life. Although the final denouement comes in the last chilling line "in the cold light of day you won't see me again."

Furnaces is a record that deals in dark oft-unspoken themes. It's not an easy record to get into, but once you do it's a complex beast both in terms of the musical arrangement and subject matter and one that is ultimately rewarding as each listen peels back new thoughts and reactions.