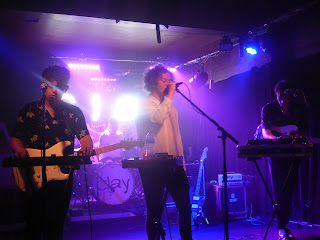 Clay brought their Heaven EP tour to the Night And Day on Saturday night and left a boisterous hot audience trailing in their wake.

Clay come on with their massive lit up backdrop behind them to the strains of a pre-recorded track called Heaven, the title of their debut EP that they're touring to promote. We get a "Hello Manchester" before they dive straight into their early single Stay Calm and don't stop or slow down for the whole half hour of their set.

"We are Clay" Joe tells us, as if we can't tell from that huge backdrop, but give it twelve months we suspect they'll need no introduction to anyone.  Oxygen, another single, is a wonderfully breathless romp and it's followed by Why?, the opening track on the EP.  The latter has so much crammed into it, a monstrous guitar riff, keyboard trickery and a closing section that's ripe for people to bounce around and lose themselves. 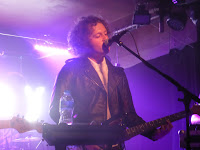 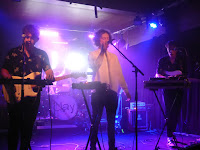 The Beach explores different territory, a fabulous impetuous rhythm at its core and challenging Joe to keep up as he delivers his vocals. You Were Always On My Mind is a new track to us and does slow the pace down a little, probably for the good of both band and audience such is the breakneck pace of the set so far, but what its subtlety does demonstrate is that Clay have more strings to their bow than the hit and run three minute adrenaline rushes of their singles.

Nothing Happened is an impassioned plea of innocence where they again make use of the instruments at their disposal as well as clever use of backing vocals to add emphasis at just the right points. Another one we haven't heard before, Cream, is introduced as a song to grab your loved one to, and feels just like that with a simple chorus message "I'm in ecstasy when I'm next to you"

Honest, the final track of the three from the EP, is described as "quite emotional" and is certainly less immediate than the other two, but that's not a bad thing as it demonstrates again that Clay have a diversity to their sound that will serve them well as they develop and pick up the attention they merit. They finish with their traditional closer Sun Dance, a brilliant funk-influenced piece that's made to make people dance. The audience, including Tom from Blossoms who's come on his one night off for months to see them, are mightily impressed by a band still learning their craft but doing it with a confidence and a passion that points them to much bigger things.

Clay played Stay Calm, Oxygen, Why?, The Beach, You Were Always On My Mind, Nothing Happened, Cream, Honest and Sun Dance.