Track Of The Day : Be Calm Honcho - Bad Man 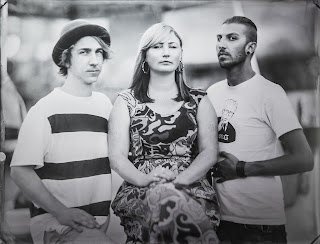 Bad Man is the second song to come out of Be Calm Honcho's recording sessions for their second album, the follow-up to 2014's excellent Honcho Dreams.

Be Calm Honcho are Shannon Harney on vocals, Alex Weston on bass and guitar and Michael Pettett on drums. Their debut album Honcho Dreams included a previous track of the day of ours I Love CA. They recently revealed their first new song since then entitled Kid Go Hard.

Bad Man shows a darker side to the band than they revealed on Honcho Dreams. Shannon told AV Club who premiered the single that "Bad Man was a phone call I couldn’t make to my kid brother because he fell off again. Off the wagon, off the map, out the back door and then silence" and the lyrics reflect that dark state of mind, but also Shannon reaching out and telling him that he's not alone or any different to anyone else - " You’re not the worst man I’ve met in my life, throw me off as best you can but I’m essential as a knife. I've got that in me too, the kick, the thrash, the throw."

We look forward to hearing more from these sessions soon.

Email ThisBlogThis!Share to TwitterShare to FacebookShare to Pinterest
Labels: Be Calm Honcho