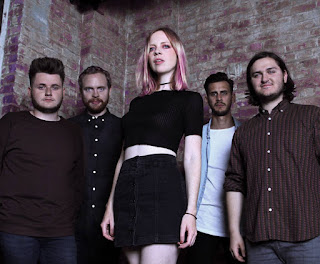 Heavy Heart's latest single Fruitfly is part of a series of songs that they're revealing one a month, Wedding Present style, through 2016, with the presumed intention of releasing an album at the end of the year.

We met Heavy Heart's lead singer Anna at last month's Belly gig at the Forum and if you're looking for a comparison to hang your hat on (we don't like doing it usually), Belly are not a bad one and Fruitfly wouldn't have felt out of place if they'd revealed it as a new song on their recent tour.

Fruitfly sits one leg in the rock pool and the other swaying playfully in the pop camp. The song starts with a driving momentum propelling it along and it never takes its foot off the pedal throughout with Anna's softly sung vocal breathlessly giving the sage advice "Be yourself, by yourself" in the chorus.

However, the warmth in her voice is in contrast with the words she's singing elsewhere in the song as the song comes to an end with the following dark line "It's feeding time, family. Cyanide and saccharine. Bitter, happy poisoning. They're calling all your children in."

Flicking back through the other songs they've released during the year, we've already got half of what should ultimately be a great album if that's the way they choose to release these songs to a wider audience than their Bandcamp and Soundcloud pages.

All songs from this year's series of songs can be found on their Bandcamp page where they can be purchased.