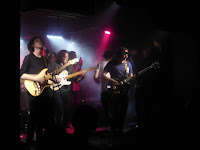 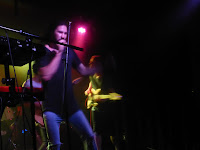 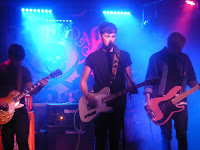 With most of the musical youth of town in the mud of Leeds, This Feeling chose the bank holiday to put on probably their strongest line-up yet at their monthly club night at the Night And Day headlined by Dantevilles but with a supporting cast of Aussie pop lovers Fairchild, Mayflower and Stockport's next big hopes Matter Of Mind.

Matter Of Mind open up proceedings fresh from their first out-of-town gig in Sheffield the night before and it's immediate that the significant interest in them recently has boosted their confidence and it's well-founded based on their performance tonight. They open with A State Of Mind, the title track of their debut EP, and from the very first line "Where the fuck is my big break, I'm stuck around here" it's clear that they mean business as well as having the time of their lives up there.

They play all three songs from the EP including Coffee Stains And Migraines plus an early song Blindside that Jordan wrote when he was sixteen as well as another new song Sunken Revelations and a fabulous rock cover of Amy Winehouse's Back To Black that does the unthinkable of covering one of those songs you'd consider untouchable and make it their own. 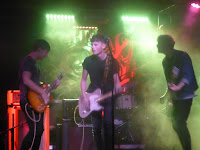 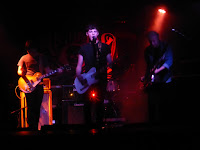 Of all those songs Silence stands out as a song that we'll inevitably hear a lot more of as they grow as a band. It's one you can imagine an academy or festival field of kids hanging off every word. It's forthcoming single Far Too Wrong which finishes the set that's the real revelation though, boasting a chorus whose genius is in its simplicity "I couldn't be more different if I tried, I couldn't even care less if I tried" with Conor's backing vocals simply adding to the powerful impact it makes before the band let loose. If there's any justice, it'll be the song that'll catapult to the forefront of people's attention when it finally comes out.

We miss Mayflower unfortunately as we go back to Soup Kitchen for Ist Ist's headline slot, but we recommend you check them out.

Fairchild have just finished recording their debut album and tonight's set previews most of it. The Australian six-piece are in a celebratory mood as a result and that transmits itself to the audience. Their love of 80s pop music is very evident, but they never sound like they're copying anyone, they demand that we have as good a time as they're clearly having and it's hard not to be sucked into the party atmosphere they create.

Lead singer Adam is an unstoppable ball of energy, spending half the set perched on the monitors, the other half amongst us in the crowd. Their recent single Neighbourhoods is a great starting point for those new to them as it lays out their musical agenda, but they've got a set full of similarly upbeat songs that you find yourself tapping your feet along to even though you've never heard them before. They don't give away song titles, but there's one we think is called Hotrod towards the end of their celebratory set that screams single loud and clearly. We look forward to the album. 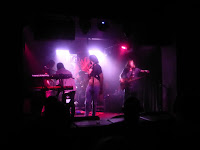 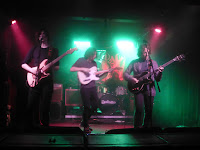 Dantevilles are riding a wave after their recent Stockport Plaza and Gorilla Blossoms supports and it's clear that the ranks here to see them have been swelled by that and it's no surprise given that they deliver a set that makes it easy to love them and want to come back for more. Delicious vocal harmonies that hark back to the days of the likes of the Beach Boys but which also sound contemporary means they've got wide appeal as you can tell from a glance around the crowd. They've got an infectious energy to them as well, demanding that we enjoy ourselves as much as they clearly are.

That's nothing though if the songs don't back it up and fortunately recent single Perfect Place and Sea Of Change show that they're capable of crafting songs that tug longingly at the heartstrings. They finish with It Might Be Tomorrow, for which they invite the audience to join them up on stage for a raucous fun end to the evening's events. It's got them recognition from Radio 1 and rightly so as it again demonstrates the enduring appeal of a singalong chorus allied to a tune that'll stick in your head. Those of us not up on stage end the song arms raised clapping along in unison with them.  And if you can do that as a band, you can take on the world.