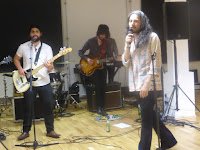 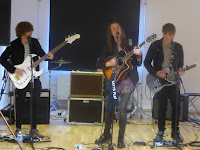 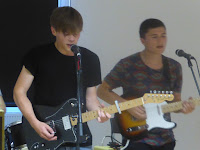 Relying on the Manchester weather is always a risky business, so the day's downpours meant that B33's Rooftop party was moved down two floors into an open space in the same building. We caught Feed The Kid and new signings Saytr Play and The Hotspur Press play short sets to a growing crowd.

The Hotspur Press are the first band we catch and they struggle initially with the sound which is way too loud for the enclosed space we're in that isn't your traditional venue and they also have issues with the drums sliding on the polished floor and falling apart. That aside the four piece take us through tracks from their Island EP that came out at the tail end of last year and they manage to hold things together and still sound tight and make a good impression despite the difficult circumstances they're playing in. Recent single All I Know and another new song Other People and front man Daniel's evocative and impassioned delivery show that they're making great strides forward in terms of their songwriting too as they continue to develop. 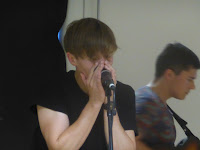 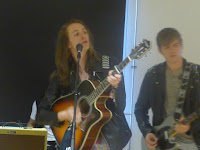 Thirty seconds is all it takes for Saytr Play to make an impression on us. There's something of star quality about front man Fred, he looks the absolute spit of a young Todd Rundgren, and he plays up to it well without it ever seeming contrived. It's still quite raw and unpolished in parts, but that's part of the appeal as one song finishes with the audience circling him down on his knees amongst us whilst their single Don't Go East is an absolute riot, wild, frantic and really laying down a marker. Out Of The Blue shows a slightly softer side to them that demonstrates that there's a diversity to their sound and performance that will also serve them well. They're still a rough diamond, not every song in their set reaches the same heights but that should come with time or they'll learn to play shorter sets until they do, but Saytr Play definitely have something that makes them stand out from the crowd.

We head out for a bit as the heat in the place is getting unbearable, ironic given the rooftop element was cancelled because of the weather, but are back in time for Feed The Kid. Their set comprises some of the filthiest blues rock you're likely to hear which their leader Curtis brings to us by positioning himself in front of the speakers to get closer to his crowd. The sound issues have been ironed out, which is a blessing as you need to hear everything to really appreciate the full Feed The Kid experience - each and every one of their eight songs is a massive melting pot of guitar and keyboard riffs, powerful drums that threaten to blow your head off and that dark menacing yet soulful delivery that stand Curtis out from his contemporaries. 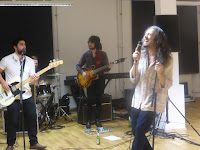 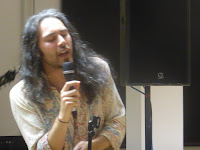 Their eight song set already feels like the basis for a big debut album and forthcoming single In The City is such a big tune it could probably fill three releases at the same time as it never stands still or goes round the same loop again. Even if this blend of hard and fast blues isn't your thing you'd struggle not to get caught up in it such is the infectious energy and passion that they generate even if this well-lit humid office space rather than a dark and dingy basement venue (or the big stages they could well be set for) where they belong.