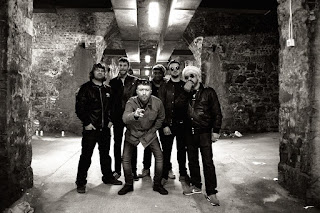 We're proud to exclusively reveal the new video from The Winachi Tribe.  Time For Love (Mark Pistel Remix) is a film that captures a mad twenty-four hours on the road as the band travelled from Aberdeen to Manchester concluding in a wild show at Manchester's Live Room. Travelling with them was Manchester film maker Shari Denson who captured the chaos and the band's back to basics DIY approach.

The release of the video, which is a brand new and very different sounding remix of a song that they revealed on Soundcloud last year reflecting the band's desire to showcase very different sides to their music and their songs, precedes their biggest headline show to date at Manchester's Gorilla on Saturday night where they'll be joined by The Moods, Happy Daggers and Strangest Of Saints.

The song's calling card "Time For Love" vocal line and the way the song mixes a number of styles and genres perfectly reflects the band's outlook. Singer Liam explains "It’s not an exclusive group, and I don’t want to make it exclusive. Whether you’re black, white, rich, poor, gay, straight… It’s for everybody, and I’d like to reach everybody. I think the whole musician ‘too cool for school’ approach where you try to appeal to ‘this sort of person’ or ‘that sort of person’ is BS. It’s for everyone. You can be massive and still be cool.”

Following their headline slot at Gorilla on Saturday (tickets available here) they head to Portsmouth for Victorious Festival on the 28th and back to Manchester for a Musicians Against Homelessness gig at Band On The Wall on September 20th.

Email ThisBlogThis!Share to TwitterShare to FacebookShare to Pinterest
Labels: The Winachi Tribe