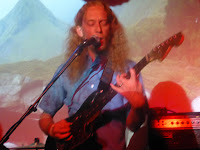 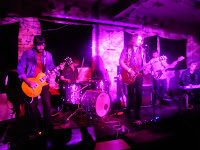 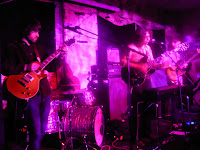 Ahead of the release of his second album Phase Zero next week, Sub Pop's Morgan Delt is touring Europe and we caught up with his set at Manchester's Soup Kitchen with support coming from local rising stars Ethan And The Reformation and Liverpool's Dusst.

Dusst open up proceedings and whilst we miss their first couple of songs, we're soon into the swing of things as they deliver track after track of blues-inspired rock that comes from deep down in their soul. They demonstrate that they're talented instrumentalists and avoid the pitfalls of forgetting that they need to have tunes to accompany that as they run through a set of songs that hold the growing Soup Kitchen audience's attention. Songs like My Day and Raven sound great, wide-eyed expansive and ambitious, but it's their final track, and recent single, Somehow that really grabs us. Big, bold and in our faces, Dusst are a band that bring their music to their audience and challenge us to dive in with them. We're mightly impressed by a band we didn't know much about before. 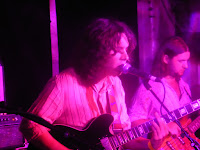 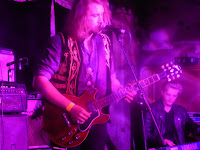 Ethan And The Reformation are very much on our radar though after a scintillating set at the Night And Day last month and they don't disappoint tonight. They've drafted Ryan in from Cupids to play bass for the night, but he's such an accomplished musician that they don't miss a beat as a result. At point their rough and tumble harmonies sound like a battered and bruised Beach Boys from the hard side of town and at others they swerve off into a psychedelic dream world of their own making. What's The Word Hummingbird sounds both like the future and a restatement of the past in the same breath, but that's what they do so well - a knowing nod to their psychedelic heroes but twisting and turning it into something new and exciting as evidenced on their recent single Hollandia.  It's getting increasing hard to stand out in a Manchester scene that's dominated by all-male guitar acts, but Ethan And The Reformation are still pushing at the boundaries and widening them.

It's always a brave move to come out and play live shows in support of an album that's not released yet, but with Morgan Delt and his band you don't actually need to know the songs, and we only had a passing acquaintance, to get them and what the band is about. They don't say much, other than when the power goes out during opening song I Don't Wanna See What's Happening Outside, but like the audience not knowing most of the songs, it doesn't seem to matter as the crux of the evening is to stand back and admire the performance and the delivery. Morgan's vocals often sit just underneath the coming together of guitars, bass and drums with occasional keyboards and feel like another instrument in themselves and the audience get this and they stand quietly and take in what's being performed in front of them. 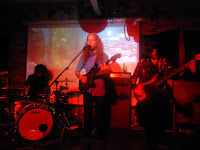 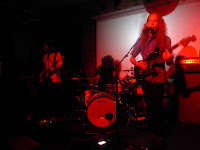 The set strikes a good balance between the first and second album and for someone not too familiar with his work we don't notice a big change in style between the songs from different albums, but that never feels like a problem because the intensity of the performance and the quality of musicanship is what makes this show. At times they deliver complex sound patterns and take the listener on a journey without ever seeming to break their stride. As they finish on the highlight of the set and the final track on the new album Some Sunsick Day the Soup Kitchen audience are finally sparked from their attentive absorption, and it's a real pleasure for a change to be stood in a room full of people hear to listen to the main act rather than their own voice, of the music and give Morgan and his band the send off that they deserve.

Email ThisBlogThis!Share to TwitterShare to FacebookShare to Pinterest
Labels: Dusst, Ethan And The Reformation, Morgan Delt