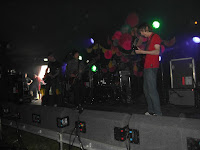 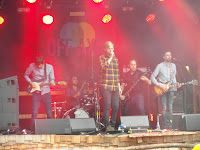 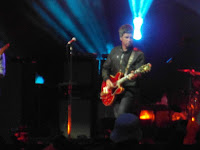 Sunday was the final day of Kendal Calling. Stuart Ralston toured the site and reports back from sets ranging to Noel Gallagher on the main stage to an impromptu set by Danny Mahon in a field, catching up with Puppet Rebellion, Space Monkeys and Riding The Low on the way and a sad tale of a lack of mashed potato to go with his pie.

We decide to explore the site on arrival at Sunday lunchtime and stumbled across a packed House Party tent where the familiar voice of Manchester's cult hero Danny Mahon could be heard. Playing as part of the Acoustica slot, we only catch a few brief seconds and are gutted to miss him as he has been too quiet too long. However, before long he grabs a guitar and plays a short impromptu set under a tree. Around 50 or so punters gathered to hear him knock out AK47 and Twat - at least half of them knew all of the words. We hope to hear more from him soon. 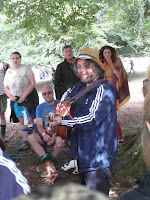 Glastonbury on a Sunday afternoon is famed now for its “Legends” slot. If ever there was a similarity at the excellent Kendal Calling festival then this is it - Manchester's very own Space Monkeys delight the audience by revisiting their seminal Factory LP The Daddy of Them All.

“Good evening Middleton” announces frontman Richard to great cheers after the triumphant opening of Acid House Killed Rock and Roll. In many ways, Space Monkeys are the perfect festival band - their mix of pop, rock and dance has the audience grooving throughout their set. Blowing Down The Stylus ploughs a similar furrow to some of their more famous Mancunian contemporaries. Let It Shine is a perfect slice of summer pop and loved by the packed House Party tent. Let It Shine has a bouncy bass, a light tinge of psychedelia and a real sense of  euphoric optimism. The set highlight for me. 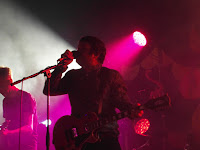 Richard comments that many of the audience weren't even born when these songs were written but that doesn't stop the crowd from enjoying each and every tune. It is impossible not to dance as the band deliver a set packed with delightful pop nuggets such as We Are The Supercool,which has an anthemic quality and sees the crowd sing along.

Sugar Cane is dedicated to Tony Wilson before a storming Keep On Tripping On gets the best crowd reaction of the set. As March of The Scarecrows begins, the plug is pulled as earlier sets today over ran.

After regrouping last year to celebrate their past, it is great to see them continue and give those of us who didn't get to see them back in the day a chance to catch them live. Sadly we didn't get to hear their cover of Tomorrow Never Knows due to the time constraints caused by earlier over runs. A real shame that the advertised 45 minute set ran to only half an hour. However, what a half hour it was.

The Stages at Kendal Calling are rather creative. The tiny Tim Peaks Diner, curated by Tim Burgess is always popular and not far away is the picturesque Woodlands Stage. As you can imagine, the stage is built into the Woodlands! It is here we have come to check out Puppet Rebellion. No strangers to the northern festival circuit, the stage is so well organised that the band have time for a full sound check before delivering a well received 45 minute set.

They have brought a sizeable fan base with them who sing and dance along throughout. The set has a fare share of new songs. Indeed, they open and close the set with new ones whilst traditional set opener Chemical Friends now finds itself mid table. As a result, it loses some of its impact. It has always been a curious, slow building, menacing number and a perfect opener. The sonic assault of Chemical Friends is a perfect introduction to a band who have delivered four well received singles in their three year history.

Tonight however The Pact gets the set underway and it doesn't disappoint. Dual guitarists Craig and Paul ensure it has impact. It is followed by another new one Maybe You Won’t which has been in the set for a while now. Maybe You Won't allows Oliver to take centre stage with a commanding vocal. Watch Me Fall - Oliver’s debut vocal for the band - shifts the performance up a gear and is dominated by Jim’s pounding bass lines. 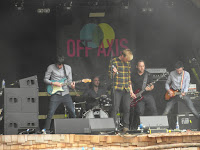 All of the tracks from last year's Life Is In Your Hands EP are present and correct tonight. It is hard to pick a favourite as all of them are passionately delivered. The title track possibly just shades it. More dance orientated than some of their material, it is another one well received by the appreciative crowd and there's a minor festival sing a long moment to boot! New single Fragments is up there as a set highlight too but is overshadowed by the triumphant Greatest Lie Ever Told. The infectious Please Me ends the show before band and fans depart. We admire their brave set choices and look forward to the debut album. 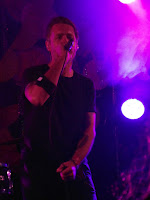 We move back to the House Party tent where by now timings are back on track and Riding The Low have just taken to the stage. We haven't seen them since way back in 2013. Fronted by Britain's greatest contemporary actor Paddy Considine, Riding The Low are no gimmick band having been performing for over ten years now.

Having just released a new album - Riding The Low Are Here To Save The Neighbourhood - the band play a storming set. At times, they play in a style similar to US rock bands like Pavement and Guided By Voices. Considine is as an energetic front man as we are likely to witness at the whole festival. Never standing still for too long, he kung-fus around whilst delivering a set littered with post-punk nuggets such as Piss Parade and What Has The Universe Done For Me Lately? Some songs are delivered at breakneck speed whilst others are almost ballads. A truly great festival performance from a talented group of musicians and many new fans won over. 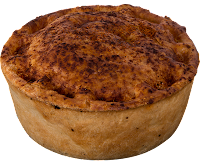 Just before Noel Gallagher's High Flying Birds, there is time to visit our favourite pie emporium (Pieminister) who have been doing a roaring trade all weekend for a bite to eat, to discover they are out of mash. Oh well, pie and gravy it is then. Delicious it was too.

Noel Gallagher And The High Flying Birds end proceedings at yet another successful Kendal Calling. The audience this weekend ranged in age from about one to seventy-one and at the High Flying Birds set many parents have brought their children along to hear Noel Gallagher's band deliver a set to keep everyone happy. Half the set is devoted to Oasis tunes with the most accessible selections from the Birds' two albums to date. Noel is in good spirits throughout, engaging the audience between songs and making the obligatory football references as well as offending part of the crowd by mocking the concept of Yorkshire Day.

Not surprisingly it is the Oasis songs in the set which get the best reception. Rather than relying on the big guns though, he challenges the audience by including some lesser known tunes and b-sides - so we get Listen Up, Digsy's Dinner, D'Yer Wanna Be A Spaceman and Talk Tonight although he does save the obligatory Wonderwall and Don't Look Back In Anger for the end to leave everyone streaming back to their tents with a smile on their face.

For the masses, a great way to round off the festival. Kendal Calling had something for everyone with an incredibly diverse line-up and opportunities for emerging local talent to shine, not forgetting the best food we have seen at a festival.