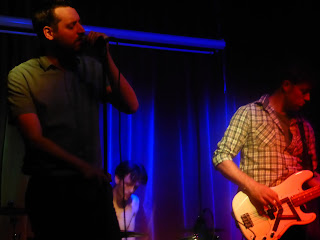 The Maitlands are another band waving the flag for the old guard in Manchester at the moment, proof that you don't have to be eighteen, photogenic and have great hair to make great music. The room's impressively busy for an unsigned night even though it's just past eight o'clock to see them run through seven strangely chaotic and brilliant songs before front man Carl hugs everyone and heads off to the bar.

There's a hint of Cockney Rebel to opener Are You Listening and Carl's on good form, both projecting to his audience but cajoling his band mates into doing something different. "Here's a new one, it's a bit of a jam" introduces Arrested Development and the song does have that loose feel to it without ever feeling disjointed or if the whole thing is going to come crashing down at any moment.

There's a load of banter between songs, Carl asking why no one is throwing anything and is met by a volley of friendly verbal abuse which he laughs off.  He jokes about putting up a big screen with the words on so we can sing along too. Kingdom United takes us on a journey of many paths, the song skipping, turning volte face and heading in a different direction almost making us dizzy and Carl's delivery at some point feels so very laid back that he's almost horizontal, but it's appropriate for the song's mood at that point and then later on there's a moment where you'd imagine hundreds of people hands raised clapping their hands and there would be no need to have the words on a big screen. 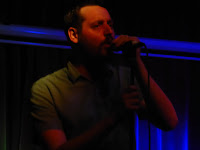 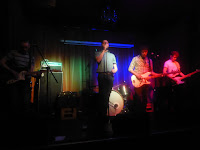 "More pop music to follow" is how Occupy Heart Space is introduced and there's something underneath their suburban nods to the likes of The Fall that mean there's far more substance to them than simple comparisons. The positivity of "it'll work out alright" repeated over again before a wall of drums rises and pummels us into submission.

There's more cat-calling between crowd and band as drummer Jonty ends up shirtless and on the floor at the back of the stage and hecklers encourage the rest of the band to do the same. Too few bands engage and joke with their audience these days because it's not seen as cool, but The Maitlands have been around the block enough not to care about such matters.

They finish with Bleak Repeat and A Few Choice Words despite the audience calling for more and more. And it's no surprise. Once you look past any number of potential comparisons in different parts of their set, what you realise is The Maitlands sound like a big mixing pot of their favourite bands thrown into a Nutrabullet and coming out not necessarily looking like the finest cuisine, but they're very definitely good for you.

They'll never make a break through because, despite Carl's charm that it's impossible not to be taken in by, they won't be seen as cool or marketable, but you sense they don't care too much because they'll always be adored by their quite sizable following and they'll make sure you have as much fun as they're having.