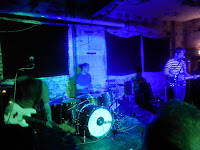 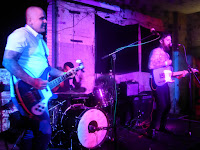 Ist Ist headlined Soup Kitchen as the launch gig for their Night's Arm single that came out on Friday. The venue was subjected to a sustained forty-minute aural assault that challenged and thrilled in equal measure as one of the city's most unique band launched eleven missiles into the packed crowd.

Stoke's Fake War open up and during their set they tell us it's only their second gig. We're surprised because they sound far more accomplished than that statement would suggest. The way in particular the bass sings and dances makes them an interesting proposition as does the rather impressive set of tattoos the shirtless lead singer is sporting. Their six-song set contains all four of the songs they've released online to date - Fluoride, the police-state condemnation of Uniforms, Virus Is The Vaccine and set-closer Another Sky - but it's Bloodlines mid-set that probably stands out most for us.  They've brought a fair-sized contingent with them too, but they could probably do without their mate throwing pints against the ceiling and covering the front rows in beer and nearly bringing things to a halt. But that's a minor hiccup as they stop then restart Another Sky for a band that left a really positive impression. 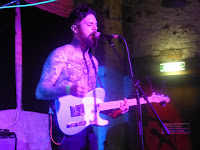 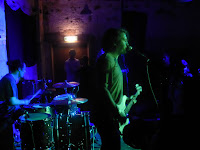 We miss Jekyll as we hop next door to the Night And Day for Matter Of Mind, but by the time we get back the venue is rammed, a sign that Ist Ist are starting to make real connections with people and the mosh pit that starts the minute they strike up Left For Dead and doesn't stop until the closing strains of Molly's Lips. This is brutal raw rock music at its finest, the sort that would probably have seen them have about ten John Peel sessions so far were the great man still alive.  Adam takes lead vocals, but there's moment where he interchanges with Andy and it just works perfectly.

Their forty minute set is carried out at breakneck speed and feels like the hardest endurance test known to man, but we're unsure as to whether that's for us or them such is the ferocious whirlwind of energy that's being unleashed before us, the blood-curdling stream at the end of Left For Dead, Joel's unrelenting drums that lay down the tribal beat that dictates pace and direction of the songs.

New single Night's Arm is even more darker and menacing before our eyes than it is in its recorded form. Previous single White Swan is dispensed with early in the set that's laced with new songs such as Heaven, 121 and My Heart Belongs To The Sea as well as some of those songs such as Rats and Animal whose raw demos first drew us towards them. There's no let up in either the raw anger of the songs, their quality and, most importantly given the raw ingredients are just drums, bass, guitar and effects pedals, the diversity as each one feels like we're under attack from another angle.

We leave feeling battered and bruised, knocked about by the musical equivalent of ten rounds with Muhammad Ali, yet invigorated, excited that a band this raw and uncompromising can fill a venue like this because Ist Ist are far-from-easy listening, a band making its own rules and playing its own game and sounding like no one else in town.