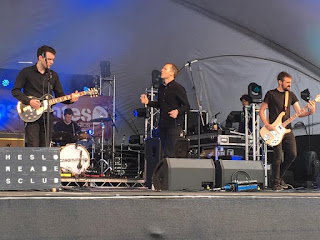 Victorious Festival is in its third year on Southsea Common near Portsmouth and it continues to grow. This two day festival is set along the esplanade against the backdrop of the English Channel. The many varied acts performed over 4 stages scattered across the vast site. Our friend Shelley Taylor was delighted to be able to catch Slow Readers Club play on two of those stages on the Sunday (28th August) and reports back for us.

Their first set was on the main stage, The Common Stage. For a festival where there is no camping and with many facing travel problems, the site was relatively empty when the Slow Readers took to the stage at 12.30. There were however a smattering of fans in distinctive black and white t-shirts. What was also noticeable was the people amongst the audience in James t-shirts, perhaps drawn to see Slow Readers following their support slot on the recent James tour.  We understand that Slow Readers Club were invited to play at Victorious festival having been spotted playing at Isle of Wight Festival last year.

One of the benefits of the early slot is that the audience are usually genuinely interested in the music, before the alcohol-fuelled masses arrive. This meant that whilst the audience was fairly small, they were prepared to engage.

The band were clearly delighted to be playing on the main stage, the singer Aaron pointing to the multi-coloured backdrop as they arrived on stage, commenting "look at that!" They put on a confident and polished performance which resulted in even the most reluctant dancers in the crowd stomping along.

The half hour set was only slightly marred by a couple of technical hitches. We temporarily lost Aaron's vocals during  "Days like this will break your heart". Later in the set, a problem with Jim's bass caused a bit of a delay which was quickly filled by an impromptu chorus from the crowd singing "Happy Birthday" to David the drummer.

First set Common Stage : Start again, One More Minute, Days Like This Will Break Your Heart, I Saw A Ghost, Sirens, Plant The Seed, Forever In Your Debt and Know The Day Will Come. 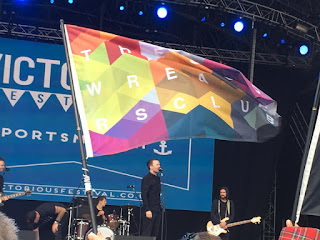 The second set was on the more intimate Seaside Stage. As the name would suggest, the stage was right by the sea and the weather had taken a turn for the worse with sheets of rain blowing in from the sea. This however did nothing to dampen the spirits of the larger crowd. There were some familiar faces in the crowd from the first set who had clearly come back for more. There were also noticeably many new faces happily singing along to every word.

There was a slight variation to the set, this time opening with Fool for Your Philosophy and an invitation for us all to dance to Feet on Fire. The band filled the smaller stage and seem to thrive in the more intimate setting.  The crowd seemed to treble in size during the course of the set and judging by the queues to purchase the album Cavalcade at the end, it seems that the Manchester foursome have won over many new south coast fans.

Seaside Stage : Fool For Your Philosophy, One More Minute, Days Like This Will Break Your Heart, Feet On Fire, I Saw A Ghost, Plant The Seed, Forever In Your Debt, Know The Day Will Come.