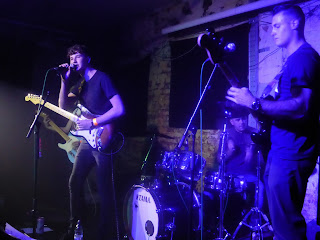 Before heading down to the Arena for Morrissey we popped into Soup Kitchen to see Urban Theory for the first time. The Bury four-piece were our Track Of The Day a few months back, but since then they've undergone a line-up change and this is their first Manchester gig with the new set-up. We leave massively impressed by a band that manages not just to sound very tight and together, but one with that something extra that's needed to stand out from the mass of four/five boys with guitars in Manchester at present.

Soup Kitchen is impressively more than half full by 7.45pm, no mean feat when you consider the massive range of great live music on in town tonight and you tell its a mix of families, friends, but also some curious onlookers who'd been enticed by the Soundcloud release of a track called Knickers, with which they finish their set.

Right from the off, they look and sound like the real deal. Front man Alex doesn't betray any nerves even if he's feeling them, new guitarist Jake looks and sounds like he's been playing these songs all his life and there's a very definite gang chemistry between him and Alex as they lean against each other shoulder to shoulder mid-set during one of the instrumental breaks. That extends to the rest of the band - Ellis who is new on drums and James on bass - as well as they gel brilliantly as a unit, something that any band aspiring to break beyond the circuit venues of town absolutely need to. Given it's the first gig they've done together with this line-up that bodes extremely well. 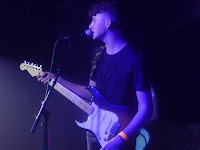 Of course it matters little if the band doesn't have the songs to back it up. They finish with Knickers, possibly because it's the song they released and the one they assume people will know and be waiting for, and whilst it's a country mile ahead of that scratchy Soundcloud demo, it's overshadowed by most of the seven songs that precede it. A brand new song called Heels In Your Hand and Mandy are particular favourites as is Weekend Offender, a song they dedicate to their mates who go and watch football every weekend. The opening riff of Cigarette Smoke is just Alex on his own and then when the other three come in and lift the song it's an impressive impact it has on the crowd.

For a first show with a new line-up this is a mightily impressive start, there's an energy, passion and vibe that eminates from the boys on stage and transmits itself to their audience in the way they deliver them and they've got a set of songs that talk about the things that affect teenagers of their age so connect automatically with both girls and boys. Urban Theory are a band to keep a very close eye on.