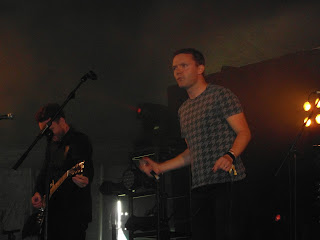 Long term ambition of the band fulfilled and another crowd won over, The Slow Readers Club take Kendal Calling by storm.

We arrive just as The Slow Readers Club take to the Calling Out Stage. They've packed out the biggest indoor arena at the ever popular festival which has once again sold out.

Start Again gets the show underway. With little or no chance of a sound check at a festival, sets could easily be hit or miss but the sound is crystal clear throughout this evening's show. Start Again is the perfect opening to showcase what the band are all about. It is full of soaring vocals, melody, a commanding rhythm section and Kurtis Starkie's subtle, confident guitar licks. For the hard core fans, substitute Chris, covering for Jim Ryan on bass makes the song his own with inventive basslines that respond to Aaron’s vocals.

The crowd give a little cheer before the huge anthemic sound of One More Minute fills the arena. One More Minute is one of only two songs tonight from the (five year old) self-titled debut to make tonight's set. Usually nestled near the end of the set, it injects pace early on with its energy and anthemic qualities. The crowd respond with more vigour than before.

Classic b-side Days Like This Will Break Your Heart slows it right down and shows another side to the band. It is almost stripped back, with each instrument - and Aaron’s voice - given its own space and as a result sounds truly magnificent. Their more reserved songs command the attention of the listener and separate Slow Readers Club from many of their contemporaries. The crowd love it.

“It's such a good feeling to be here” proclaims Aaron before yet more cheers and a gear change on I Saw A Ghost. Once again Chris stars with his improvisations on the bass. Plant The Seed is the stand out track once again.

The band are in confident mood and tonight's show in front of a huge crowd is a breeze. They're not done yet though and the closing trio of Forever In Your Debt, Sirens and Know The Day Will Come only add to joy they've created. Since the release of the Cavalcade LP last year, the band have rarely had more than a few weeks off and it shows. Every song in every set is delivered with a passion and commitment. The audience tonight,many of whom will be seeing the band for the first time are noticeably louder after each and every song. Forever In Your Debt and Sirens - two of the most featured songs over the last two years or so still sound and fresh as ever and really pack a punch.

The majestic set closer Know The Day Will Come rounds things off nicely, leaving the audience eager for more. Sadly, time doesn't allow it. Other more established bands won't get the same sized crowd or reaction this weekend. The Slow Readers Club deserve every plaudit thrown their way though as they continue their rise. Doing it their own way, we salute them.