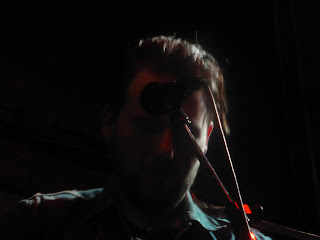 It's ten years since Liam Frost and The Slowdown Family released their debut album Show Me How The Spectres Dance, destined to go down as one of the greatest lost albums of all time, its claims to greatness done immeasurable damage by the fascination of the southern music industry with the concept of Britpop and the demise of a record label that hadn't the means to support it. Ten years on, Liam's reforming the band to perform two sold-out shows at Manchester's Deaf Institute in early September and he warmed up with a solo show at the intimate Artisan in Rawtenstall.

Compared to Bright Eyes and starting out around the same time as Liam Fray's pre-Courteeners solo days, Liam Frost missed the boat in one of the biggest miscarriages of musical justice of my lifetime. Two albums brimming with a mix of intelligent dark-tinged pop and acoustic songs never got close to the audience that they deserved, but he continued to play the occasional show before releasing the Wild Places EP last year and an album with his mates in Tokolosh.

Liam plays a set stretching over an hour and a half touching on both albums and the EP, but with an understandably heavy focus on Spectres as he will be playing it in full in a few short weeks. It's noticeable that he doesn't play She Painted Pictures, the song that announced him to the world, but one that he appears to not like and hasn't played for years. 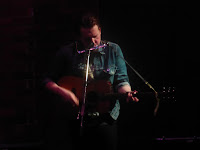 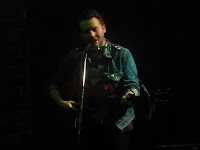 He does though resurrect Paperboats which we've not heard for a long time and he tells the story of having google lyrics for another one because he doesn't sit at home, in a masturbatory way, playing his own songs. It's that dry sense of humour that endears himself to the assembled crowd of locals and out-of-towners eager to catch his first solo gig in nearly a year. He tells us how he split his jeans earlier on and had to replace them at TK Maxx via a change in Tesco's toilets.

His second album We Ain't Got No Money Honey But We Got Rain, arguably a stronger record than his debut, suffered an even more ignominious fate at the hands of an even more broke record label and a press that covered its stupid face and looked the other way. The likes of Skylark Avenue and Held Tightly In Your First represent that album. The Wild Places EP, a more reflective set of songs than his two albums as he let go of his inner rock beast with Tokolosh at the same time, is well-represented too and this audience gives those songs the same respect and recognition that the rest of the set gets.

He starts to cover Sade's No Ordinary Love, but forgets the words half way through so plays Frank Ocean's Swim Good instead. He finishes his set with a glorious rendition of The Mourner's Of St Pauls, which still sounds every little bit as personal to him, but at the same time expressing feelings most of us have experienced at some time in our lives.

Towards the end Liam addresses the oft-made comment about him deserving a much wider audience, which we've done constantly over the years. "It's never been about that. It's been about experiences and meeting cool people and I find it amazing that I wrote these songs in the middle bedroom of my parents house, got married and had kids to the songs" and told a story about a man with cancer who listened to him continuously as he died and how the way the songs reached people and generated the sort of reactions to the songs he wrote in his early twenties was humbling.  He tells us he's going to use the forthcoming shows to bookmark Spectres for a while as he looks to do another project, which we hope will lead to another Liam Frost album. 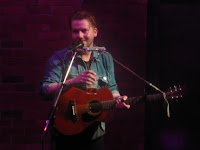 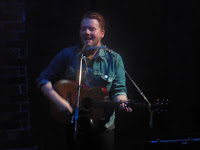 He does joke though that he wonders where the 800 people or so that snapped up Deaf Institute tickets in a couple of hours have been for the past eight years. It's a valid question and better than his joke about whether he's made anyone pregnant yet.

Quite often the really great songwriters are only properly acknowledged once they're no longer with us, which is a fate we don't want to befall Mr Frost as The Wild Places EP showed that he's still able to tug at and tear the heartstrings even with the wisdom of years since he penned those first songs in a Prestwich bedroom.