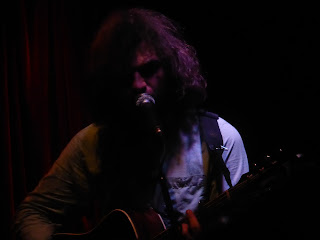 Ahead of the release of his third album Golden Sings That Have Been Sung, Ryley Walker took to the road accompanied by his Norwegian pals Stolle on drums and Julius on bass. In the country's most unique venue we witnessed a performance by one of the world's most unique performers.


Ryley knows how to make friends with his opening line "Hebden mother fucking god damn Bridge I love you. I never heard of this city before but it turns out to be the most magical lands in the world." The Trades is a truly special venue and one tailor-made for Ryley, the wandering free spirit of the town and the club is perfectly in keeping with the spirit of his music and his approach to his fans. Rather than skulking back stage, he's in the bar with the rest of us before doors, chatting, hugging everyone as if we're long-lost friends.

There's a rich improvisational vein that runs deep through his music. His albums, not to decry them, could never hope to match the live experience where spontaneity is king, even with the expanded format of the band compared to the solo shows of his last visit. We're taken on a three minute trip with a slow build that simply heightens the expectations of the packed crowd before he stops dead in his tracks, plucks the strings slowly and purposefully, head bowed and starts to sing Funny Thing She Said. Every word in that rich deep tone of his feels like it could be his last such is the intensity he imparts. That's matched by when the songs veer off at tangents, at times a huge wall of sound and at others the most simple quiet fragile music that you'd struggle to hear if the audience weren't stunned into appreciative silence. The song's six and a half minutes on record becomes nearly twelve. 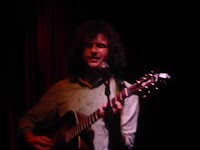 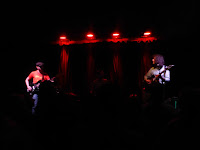 After a wild version of Summer Dress from last year's breakthrough album Primrose Green that veers away from the recorded version to thrilling effect and ends with a discussion about Pat Metheny, it's back to songs from Golden Sings as Ryley introduces the album's opening track The Halfwit In Me thus "It's about me being a dumbass, quite easy to write, I could have done a hundred songs like it" and we're four minutes in of the most natural sounding  before Ryley looks up distracted and tells us John Abercrombie was the greatest guitarist ever then says "let's get back to the song" and here we're hit by the contrast by the complexity of the improvisation and the way the three of them have an intuitive connection that's gone before it and the self-deprecating warmth of the main body of the song itself.

The Great And Undecided, another track from Golden Sings, follows and again feels a million miles away from both the album version and the solo one that he played earlier in the year at Band On The Wall back in Manchester. He recalls the first time he played it in a redneck town full of Trump voters and university students and apologises for Trump being on our TVs. The album's closing track Age Old Tale has the feel of a bar room jam to it as well, perfect for our surroundings and the attentive crowd who are hanging on every chord change and every word of these songs that the majority would not have heard or know.

"No more of that sad shit" Ryley tells us as he dedicates The Roundabout to "the hippies of Hebden Bridge" as they strike up a whirlwind of guitars that feel like they're swirling around the room. It's hard to know whether to watch Ryley's hands or his face at times to marvel at the way he's somehow coaxing those sounds out of six strings or the expression on his face as he lives every single syllable of every word he's imparting. Primrose Green has a similar impact on us, the original song feels like it's just a template, a sketch from which to create a one-off masterpiece that will never sound the same again. 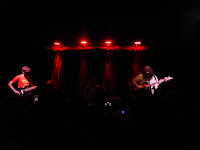 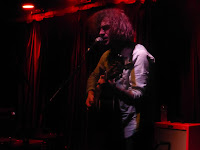 There's no way the crowd is going to let him finish here and they're cajoled back on, Ryley beaming from cheek to cheek at the response they've so rightly received so far. He starts the encore with a solo song we don't recognise and when he plays on his own it feels even more intense, like a coiled spring tightening about to explode before they finish, after an apologetic plug for merchandise and for being drunk, with a cover of Van Morrison's Fair Play, which they take and twist and leave their own indelible mark all over.

"Places like this are the reason why playing music is such a pleasure, make sure it's here for ever" is his parting shot to us. The Trades Club is unique, but so is Ryley Walker. A one-man force of nature touring with his mates rather than his band mates, using songs as a mere framework around which to craft unique performances every night. This isn't easy listening, nine songs in a hour and half tells its own story and you can never be quite sure what you're going to get other than a man with music running through every vein and in every intake and outtake of breath. There's no one like him alive at present, a bona-fide troubled genius finding salvation and respite in his music and, in particular, in its live performance. Some day he'll be rightly lauded for this, today he might well hit the wall of the need for immediacy and the disposable demands of mainstream modern music audiences who simply can't handle the concept of spontaneity, depth and unpredictability.