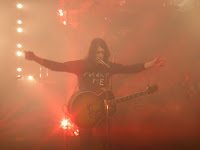 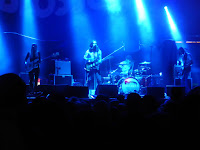 2016 has undoubtedly been Blossoms' year. Tipped as the next big thing by pretty much everyone (except us, as they topped our 2015 list), they delivered a number one album which managed the rare feat for a debut of holding on to the spot for a second week as well as constant touring around the UK and further afield. As they top of the year with another sold out UK tour we caught up with their second night at Manchester's Albert Hall for a triumphant homecoming (of sorts, Stopfordians) supported by Inheaven.


We're a bit gutted that Georgie had to pull out of these Manchester shows due to illness as she's an act we have high hopes for and it would have been great to see her in such surroundings before she ends up in here in her own right, but any disappointment is blown away by Inheaven. We hadn't heard much of them before the show, but we're immediately taken by the way they use both lead James and backing vocals from Chloe to impressive effect. The boy/girl, girl/boy vocal is much underused in our opinion, but it adds a lift and a character to Inheaven that makes them stand out. 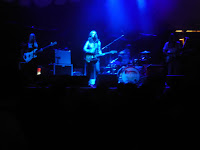 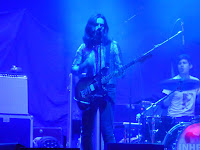 Their songs feel tailor-made for big halls like this but they manage that without compromising on the raw energy at the centre of tracks like Baby's Alright and Meat Somebody nor the excited adrenaline rush of debut single Regeneration that finishes the set and current single Treats. There's elements of pop, shoegaze and grunge in what they do, but somehow they manage to mix those contradictory ingredients into something that's immensely palatable and which connects with the crowd as a refreshing alternative to some of the identikit bands and acts that major labels are pushing on us these days.

Before Blossoms take to the stage, the crowd sing along every word to The Smiths' This Charming Man and The Human League's Don't You Want Me, drowning out the PA. It's telling because this is what lies at the core of Blossoms' appeal. What they do is in so many ways unadultered unashamed pop music, but they do it with an ear for the classic sounds that define an era and that's why they will outlast all the other bands that have had similar trajectory in previous years. This set is not about just playing a debut album and stretching the songs out with big lead ins and extended solos, it's sixteen stone-cold killer songs that everyone in the place is singing along every word to as well as half the instrumental parts - and they've got enough to leave out songs like Madeleine, Smoke and The Urge. 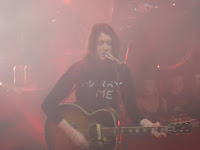 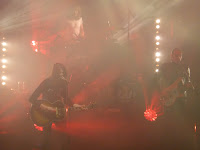 They start with six singles - reeled off one after the other - each one pummeling any possible doubters into submission and demonstrating that Blossoms are anything but a one-trick pony. At Most A Kiss is exuberant, a call to arms, Blow and Cut Me And I'll Bleed (their first two proper singles) and You Pulled A Gun On Me hark back to their more psychedelic beginnings but never feel out of place, whilst Getaway and Blown Rose are beautifully crafted perfect examples of a guitar pop that's quintessentially English that has charmed the world since the days of The Beatles. Blossoms however do it with a panache that no one's come close to in my lifetime at least.

It isn't just about singles though, the album and EP tracks (and isn't it great to have a new band that understands that magical tradition) are met with the same love, reverence and energy from a crowd that doesn't stop moving all night. Honey Sweet sees Tom stood on the monitor sucking in the roar from the crowd whilst his band mates effortless ooze the cool that makes both the boys and girls look up to them, whilst Wretched Fate and Across The Moor reveal another side to them, a looser sound without ever losing the base principles of what makes a great song. It's all aided and abetted by a light show and a crisp on point sound that both accentuate the impact of the band.

As the main set draws to a close, the rest of the band leave Tom centre stage sat at a keyboard for a solo Onto Her Bed which brings the mood down temporarily, but ends with him again almost being drowned out, before an acoustic My Favourite Room segues into lines of their own Misery, Last Christmas, You're Gorgeous and Half The World Away.

They come back on stage with Texia, still with the weird electronic opening that feels a little out of place, but the song itself is possibly their best. And live, even more so, as its glorious electronic shimmer bounces off the halls of this stunning building. Polka Dot Bones builds to a magnificent crescendo before a brooding Deep Grass could point the way to what album two might sound like, a darker beast that still wears those pop tone shades.  The final denouement though is Charlemagne, their signature tune for now, and the whole places erupts as cannons fire blue and white ticker tape into the steaming hot Albert Hall air.  As they leave Tom reprises the first line of Blow's chorus and departs leaving fifteen hundred voices to take up the mantle.

If there was ever any doubt that Blossoms were unstoppable, tonight dismissed that out of hand. Whilst others might smack of hit and run and one album wonders, there's a depth and an understanding of how to push the right buttons with words and music here that no other young band comes close to. People point to them playing the industry game, but that's just petty jealousy. Blossoms have played every toilet circuit venue in town as they've grown as a gang and worked harder than any band this year out on the road, and if you're sick of them now, you better get used to it because they're going to be the biggest band in the country in 2017 and beyond.

Blossoms played At Most A Kiss, Blow, Cut Me And I'll Bleed, Getaway, You Pulled A Gun On Me, Blown Rose, Smashed Pianos, Wretched Fate, Honey Sweet, Across The Moor, Onto Her Bed, My Favourite Room, Texia, Polka Dot Bones, Deep Grass and Charlemagne.