Track Of The Day : One Way Song - Dr Spraza Lies 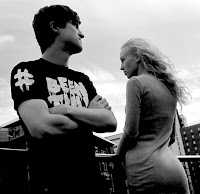 Back in August, we introduced One-Way Song and they're back with a new song called Dr Spraza Lies which represents a new direction for the project that morphed from a theatre project into a band. Scrapping their early work, including an almost-finished debut album, was a brave move, but if Dr Spraza Lies is anything to go by, their new approach is set to pay dividends.

The single was recorded at Hilltown Studios in Colne and is the lead track from an EP they plan to launch in early 2017 called Passionate Leave (And Certain Evictions). Front man Luke Gilfedder describes the song as "Dr Spraza Lies' is a fable about a fatally idealistic Brutalist architect in 1930’s Germany who, upon receiving a horrifying prophecy of bland 21st century suburban housing estates, makes a rather misguided alliance" and part of a more "maximalist" approach than the minimalist one of their earlier work.