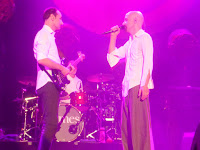 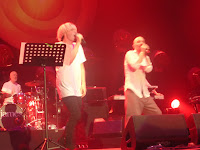 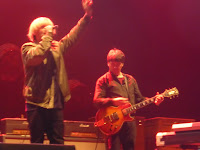 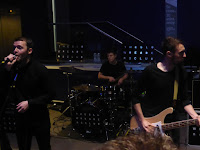 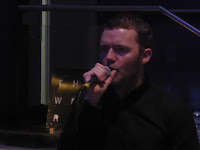 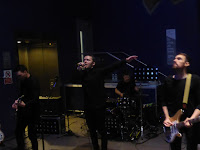 In a year of triumph after triumph, tonight's was a peculiar one for The Slow Readers Club, but one which confirmed their unstoppable momentum. Persuaded by the insistence of Saul of James that they should play the gig, but with main stage constraints meaning there was no space, they played up on the foyer just before The Charlatans. This meant that those in the standing area couldn't come and watch them because of the venue layout, but there was hardly space for those in the seats as the crowd sprawled back as far as you could see from the stage. These sort of set ups have the tendency to go wrong, but credit to the Echo Arena they set up an excellent sound package for them which allowed them to deliver a half hour set that properly represented them as a band. 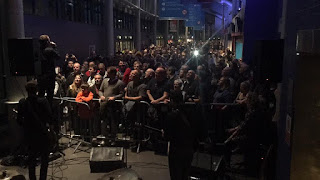 Having to pick a set for half an hour now is an issue given they have at least double that in songs that will immediately grab an audience but they settle on eight songs that give a mix of old and new and their different styles - with Sirens and One More Minute representing the debut album and the title track, Start Again, Days Like This Will Break Your Heart, Plant The Seed, Forever In Your Debt and I Saw A Ghost from Cavalcade. It's an impressive set and the crowd's reaction is astonishing given the late notice of the show and the absence of many of those who experienced them in May and at their own recent Ritz headline. Aaron takes to the speaker to be able to see over the crowd and allow them to see him at various points, particularly on his "Jimmy Somerville moment" Plant The Seed, Start Again and the closing I Saw A Ghost, which concludes with Kurt, Jim and Dave facing each other and delivering an extended ending accompanied by growing chants of "Readers, Readers" that feels like the perfect send off for a 2016 that has been a a magical year for them and anyone following their journey.

We then make our way down to the floor for The Charlatans. Like James they're one of the few survivors of the Madchester era, and like James they were never really part of it and are still producing songs and albums that stand up to anything they've done before. Their set demonstrates that as the likes of Come Home Baby and Let The Good Times Be Never Ending don't feel out of place sat next to some of their iconic songs such as North Country Boy, Just When You're Thinking Things Over, One To Another and of course The Only One I Know.  In Tim Burgess they've got a front man who is also very much one of a kind. Snapping pictures and tweeting them between songs to help build that connection he has cleverly but naturally built with his audience, during the songs he's like their biggest fan, lost in the music, in a world of his own, encouraging the thousands in front of him to join in, one minute head down soaking in the song, the next arms raised outstretched summoning the masses to sing louder and dance harder. 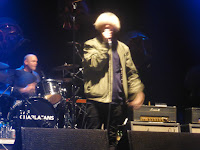 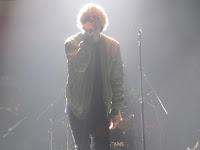 The first of the much rumoured collaborations comes about as the penultimate song of the set, Tim and Andy of James joining them for a cover of Echo And The Bunnymen's The Rescue. We'll admit we were worried about the prospect of the two bands coming together being something horrific and cheesy, but we should have known better. There's clearly a lot of love and mutual respect between the two as they've wound their way around the pitfalls, the highs and the lows of the business, both on the outside of fashion and it's somewhat appropriate they cover the Bunnymen for that reason on top of where we are. They finish of course with Sproston Green, its unmistakable slow build reducing the front rows to one sweating heaving mass that doesn't stop until the very last bars.

For a band that's gone through so much trauma in its time, it's a miracle on its own that The Charlatans are still here.  For them to be still inspiring such devotion as well is testament to what a great band they are. 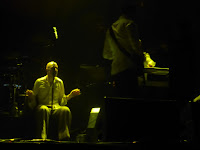 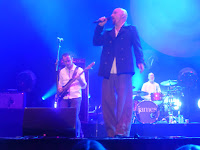 A quick changeover and it's time for James. It'd be easy to respond to the gauntlet thrown down by The Charlatans and deliver a greatest hits set, but anyone who really knows the band knows that this is the last thing they'll do. What they do is though mix some (but not all) of their best known songs with half of their number 2 album Girl At The End Of The World and some rabbits pulled from their hat of thirty five years of being a band. The magic of James 2016 is that the new songs don't feel at all out of place up against the big hitters. To My Surprise, dedicated again to Donald Trump, fills the whole place with its exultant "were you just born an arsehole?" chorus whilst Surfer's Song has Tim down amongst us, on top us, surfing on a sea of raised arms. Even when they surprisingly drop the delicate Feet Of Clay in mid-set, a brave move in an arena that had just sung their hearts out to a stripped down She's A Star, the performance overwhelms any desire those that don't know it to lose interest. 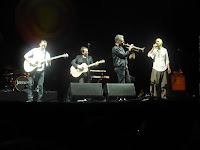 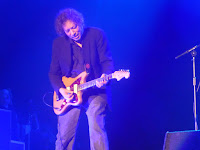 Johnny Yen, from right back in 1986, sits next to a Born Of Frustration where Tim sets off round the seated area to get closer to them and Andy ends up opposite him at the other side, which flows into Dear John off the latest album. It's a timeline that touches at the heart of why James are so unique and have been for getting closer to four decades now. They can pull off something like Five-O with its extended violin intro from Saul and a wonderful slide solo from Adrian and Interrogation where Saul looks completely at one with the world as the song builds to a glorious conclusion. The heavy hitters towards the end of the set - Come Home in particular leading to people forgetting their ageing limbs to pretend it's 1990 again - are interspersed with an immaculate Attention, a song of parts that builds and builds before reaching every corner of this huge hall as it explodes back into life. 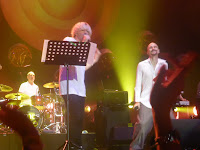 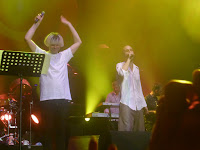 Tim and Mark from The Charlatans join them for Laid. A lyric stand is set up for Tim, but once the song gets going he doesn't really need it. The two Tims stand side by side, dance in their own very different ways, but when their eyes meet you can tell it's a moment of coming together of two legendary bands and equally legendary front men. Sometimes finishes in an almost deafening sing back of its refrain that goes on for almost ten minutes with the band coming back in at the end. The whole evening finishes, appropriately given that 2016 has seen a real renaissance in James' fortunes, with a triumphant, ebuillent Nothing But Love as ticker tape comes down on to the band, mostly seemingly landing on Jim.

The whole night is every bit the success we'd hoped for - three of the best bands around coming together in front of an audience of music lovers that want more than just the standard hits out for the lads arena fare that most bands deliver. The collaborations between James and The Charlatans weren't overblown, cheesy or forced as they so often are, but demonstrated that there's a massive mutual admiration between two bands that, where we were stood at least, was reciprocated amongst the fans too.

James played Waltzing Along, To My Surprise, Surfer's Song, Ring The Bells, Moving On, Interrogation, Five-O, She's A Star, Feet Of Clay, Johnny Yen, Born Of Frustration, Dear John, Getting Away With It (All Messed Up), Come Home, Attention, Just Like Fred Astaire, Laid, Sometimes and Nothing But Love.

Email ThisBlogThis!Share to TwitterShare to FacebookShare to Pinterest
Labels: James, The Charlatans, The Slow Readers Club