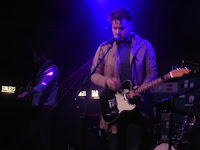 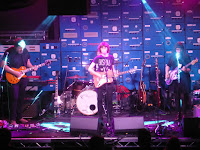 Back in September, Liam Frost reunited The Slowdown Family for the tenth anniversary of their debut album Show Me How The Spectres Dance. At the end of the shows he revealed that they were writing new music for a record that they hope to release in 2017. This first show since then revealed a couple of new songs, revisited some old favourites and a little Christmas spirit. Main support came from Baby Brave.

Baby Brave are a four piece from Wrexham with a couple of EPs under their belt. Led by the beaming Emmi, they deliver a half hour set of hook-laden songs that grab you immediately and don't let go. They make great use of Steve and Sian's backing vocals to contrast with and complement Emmi to create something that mixes pop with something a lot stronger. Songs like the adorably titled Mimic My Shins, Jitters and Baby I'm Bored will charm the pants off you whilst leaving you tapping your feet to their infectious rhythm and melodies. There's such a joy in the simplicity of their performance too that leaves us utterly charmed and wanting to see them again. 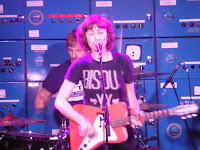 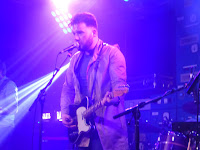 The venue has filled up considerably by the time The Slowdown Family make it onto stage. They open with a new song Devil and what's immediately evident is that time hasn't dulled their ability to create songs that tug at the heartstrings, full of moments of raw emotion coupled with frantic searching sections where the drums drive the song along. Things then take a turn for the sublime verging on the ridiculous as they mash up The City Is At Standstill with Last Christmas. It sounds an appalling idea that should insult our ears, but it works brilliantly.

Having played Spectres in full a couple of months ago, it's time to go back to Liam's second album (without The Slowdown Family this time), the massively underrated masterpiece We Ain't Go No Money Honey, But We Got Rain. Two Hearts and Held Tightly In Your Fist are honest, raw emotional outpourings set to music that spins it round and makes them feel strangely euphoric. Rain era b-side Eastern Daylight Blues is slightly more sedate in its approach, but this just makes the emotions even more open and raw.

The second new song, written by Andrew Raymond, is a beautiful folk-tinged number that allows the warmth in Liam's voice to come to the fore. At the end Liam declares "Slowdown 2017, making music great again." Whilst that's a bold claim, the scene will be a much better for the return of Liam and his gang. The issues they'll face though is clear when Liam asks if people want to hear something off Spectres and we get one of the biggest cheers of the night. In our view it sets the bar high for the new record, but that should be a challenge rather than an albatross.

At First It Felt Like Darkness, a b-side from The City Is At Standstill follows before they go all festive and do a cover of Blue Christmas. Emmi and Sian from Baby Brave join them to sing Martha Wainwright's parts on Your Hand In Mine, the song that in an alternative world would have been his first number one single. It's a little ragged, but it just adds to the delirious joyful impact. 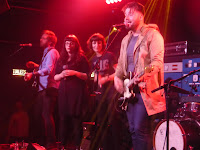 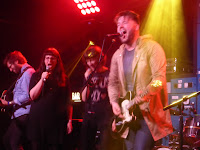 It's back to Spectres though for a trio of songs. She Painted Pictures was the song that Liam announced himself to us with and its simple joys still sound as fresh today as they did eleven years ago whilst Try Try Try is a little more seductive in its approach but no less impactful. Neither quite though have the triumphant effect of The Mourners Of St Paul's which manages to turn itself into a song about a descent into drinking after the death of Liam's father into something of an exorcism of the negative thoughts, the crowd singing the first verse.

The set finishes with two new songs that should appear on the Slowdown album in 2017, although both are familiar having being aired on Liam's solo EP Wild Places last year. Who's Gonna Love You and When I'm Alone merge into each other, but they are further proof that time hasn't diluted any of his or his band's creative juices. The crowd aren't letting them go that easily though and Liam and Pete come back for a fairly ramshackle but endearing version of Road Signs And Red Lights where Liam forgets a line and gets us to sing along to Pete's haunting violin.

Hopefully The Slowdown Family album will materialise in 2017. It felt at this show that Liam's been invigorated again by meeting up and playing with his old mates and that's driven them forwards. The new songs don't need to shrink in the background compared to the more familiar material, which is always a good test of how a band getting back together is going to fare. They look and sound very together and with Liam, still one of the city's finest wordsmiths, at the helm, there's still a big place open for them in the hearts and record collections of the city.