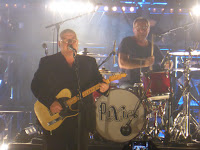 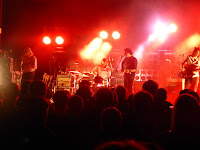 Pixies' latest tour in support of their second post-comeback album Head Carrier hit Manchester Apollo on Sunday night. A thirty-four song set covered all bases in their career from Surfer Rosa through to their latest album and left us with one of the most spectacular encores we've witnessed. Support came from the excellent Fews.

Fews open up proceedings and the Swedish/American four piece are something of a revelation. Until they finish with a nine-minute Ill in which they lose themselves in a wall of noise, they deal in short, sharp stop start bursts of rock music that make clever use of Fred and David's vocals either together or alternating to deliver a sound that fills the cavernous corners of the Apollo. Support slots with bands like Pixies can be a hiding to nothing where people are here to relive their youth and not necessarily open to new music, but Fews' set is one that it's impossible to ignore. 100 Goosebumps, Drinking Games and especially The Zoo have people's ears pricking up because they exist in the same territory as the headliner's best work, but in a zone of their own. We're mightily impressed. 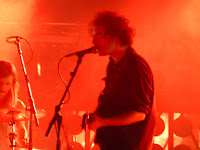 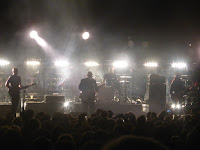 The anticipation in the room is palpable though for the headliners, a band that made two of the most important records of the teenage years of most of tonight's audience in Surfer Rosa and Doolittle. It's a dilemma most bands on the comeback trail face - the desire to deliver new music against satisfying those for whom the ticket price feels like it warrants them selecting the setlist personally. To Pixies' ultimate credit, they get the balance just about right even if it means a thirty-four song hour and three quarter set that you wonder how Black Francis manages given that he never steps back from that rasping delivery that you think must be tearing his vocal cords apart.

The audience response naturally favours the older material, the mosh pit heading back to the mixing desk for those songs that have soundtracked people's lives for nearly three decades, whilst the new material is met with something a little more sedate. However, there's moments such as Bel Esprit, Classic Masher and Magdalena 318 that challenge the crowd to let go and accept the new songs and forget any expectation that they're just going to channel that intoxicating spirit and fearless elixir of youth of those early albums in their later years.

What often gets neglected in the desire to sing along to those Doolittle classics Monkey Gone To Heaven, There Goes My Gun, Here Comes Your Man and La La Love You is just how accomplished musicians the band. Joey Santiago's stunning riffs are all over these songs, both old and new, and when he's given the space to deliver an extended solo close to the end of the set, it's one of the highlights, whilst it's Dave Lovering's drumming (and lead vocals on the last of those four songs) that drives the frenetic life-affirming pace of these songs along. Paz Lenchantin on bass answers the Kim Deal question in the only way you can, by being her own woman and not trying to imitate the inimitable. Her presence may not please the purists, but it makes them feel more like a band than they did with the bad blood still running deep when they came back in 2004. 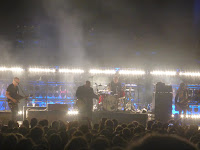 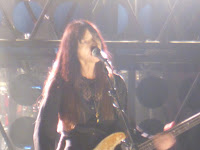 They say nothing to us because there's nothing to say, other than to simply let the music do their talking for them. They finish the main set with a rousing Debaser that has the whole of the Apollo singing about being a chien andalusia and take their bows to each corner of the venue before we're engulfed by waves of smoke that come all the way back to the mixing desk making visibility next to nothing as they crash into a glorious extended version of Into The White, with Pax's vocals repeating the title line as more smoke comes at us just as we think it's going to dissipate. They leave behind this cloud as the strains of Saturn 5 by Inspiral Carpets starts to permeate the clearing air.

It's a masterclass from Pixies in how to handle that old/new dilemma, play all the songs you know people would pay the entrance price to hear on their own because they are some of the most important songs to them ever whilst still playing the new material that you've worked so hard to create and never pretending that you can be the same band you were in the flushes of youth.