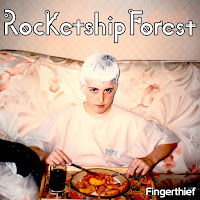 The brief accompanying Rocketship Forest’s new EP Fingerthief states that the songs “wrestle with the themes of charlatan clairvoyants, alien abduction, riot mentality and pyromania” which was reason enough to have a listen to it and we weren’t disappointed.

Opening track Poundshop Clairvoyant starts off with no indication of the madness that’s about to hit us when they get to the chorus., a big pounding drum beat leading the way as they reflect “give me your coffee grounds and I can turn your shit life” before a wild flurry of guitars overwhelm us with a voice shouting through the middle. The pathos in the lyrics returns in the second verse “I talked to your ancestors and they all think that you’re a moron” before all hell breaks loose again. They keep control admirably though as a guitar solo takes over in the middle eight – it’s loose, wild, chaotic, but it’s got a sense of mischief to it that makes it rather wonderful.

Bombers’ Notebook is made of the same base ingredients and employs the same hit and run tactics, but it’s far from a copy. You can tell the sucker punch is coming but when it comes along you ride it and smile as the instruction comes to “spray my name on the walls with an aerosol can” as the lyrics resemble the stream of conscience of an arsonist.  At just over two minutes it’s short, sharp and doesn’t overstay its welcome.

Life Of The Party adopts a more aggressive tone vocally over an unnerving stop start guitar that adds to the impact of a tale that charts the descent of a city centre event into a riot - “The scene’s getting ugly as friends exchange blows.” Like what’s gone before on the EP, the lyrics are streetwise and this urban awareness gives the songs a genuine integrity and relevance.

The final track The Fourth Kind has a bit more mystery to it. Given what’s gone before, we’re certain it’s the one about alien abduction as they reflect on leaving the planet behind “can’t say I’ll miss the old one.”  It’s more ambitious musically and vocally than what’s gone before, but is successful in both respects as they tell the tale of the alien craft coming to get them and “friendly hands beckoning me”, the music adapting to add impact to the words. The last minute is a spoken word monologue that doesn’t feel quite like it fits with the song, but an interesting close to the EP with the final line “I’ll be damned if I give him the satisfaction of seeing me dial 999 with my nose.”

Fingerthief is the sound of a band that’s operating by their own rules, refusing to be or incapable of being (it’s hard to tell which) tied down to easy categorization and run of the mill lyrics. It’s a challenging listen, strange in parts, but one that reveals a little bit more each time you hear it and thankfully one that lived up to the billing it was given.