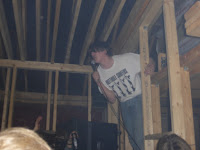 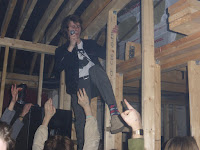 Deep in darkest Salford is The White Hotel, formerly known as The Bunker, an old garage where the pit acts as a bar and acts perform in a cage whilst the audience are in the adjoining one. It's an unusual place to catch a band that's everywhere at the moment - BBC Sound Of 2017, Blossoms and Courteeners supports to name just two, but Cabbage are no ordinary band as they proved with a chaotic performance in the smallest place you're likely to see them for a long time.

After what seems like an interminable wait between the last act and them coming on to stage, Lee and Joe scream "we want a hit" and they launch into recent single Uber Capitalist Death Trade and the assembled crowd comes alive, throwing themselves and others around the confined space, threatening to topple the speakers at points. Whilst the audience might lose control, Cabbage don't, despite Lee climbing all over the frame of the cage, one leg resting on the speaker, the other dangling precariously above our heads. Their onslaught is overwhelming, on the brink of completely falling part, but they're masters at clinging to the last vestiges of some sort of order which means the result is unpredictable, thrilling and exciting.

Kevin simply ratchets the chaos up another level, Lee spitting out words at such a pace they become one seriously fucked up joined up monologue set to the sound of guitars, bass and drums colliding head on, bouncing round the room and then slamming back into each other. It's an approach that Cabbage repeat throughout their set, but they're clever enough to twist and turn it inside out so that two songs never sound the same. Fickle is, by their standards, a slower track, but the assembled pit doesn't care about being battered and bruised until the gig's over. 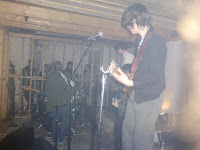 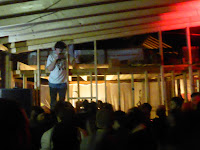 Indispensible Pencil is introduced as being about why Andy Warhol pisses them off. One of the most intriguing things about Cabbage is the subject matter of their songs, there's no one else singing, protesting, shouting about the links between Savile and the royal family (Necroflat In The Palace), the American politics and justice systems (Free Steven Avery, which results in how many of us were crammed in there yelling Death To Donald Trump like some sort of warped distant mission statement) and the trials, tribulations and masturbatory experiences of working as a dinner lady in a private school. Somehow, in the moment of the gig, with the adrenaline rushing, it all makes perfect sense though. Throw in a cover of Nancy Sinatra's These Boots Were Made For Walking that feels like it was written just for them and it all fits into place despite its component parts seemingly making no sense.

With close to twenty songs to their name, Cabbage have already laid down some impressive markers. The site of a crowd losing itself in wild abandon at their ever increasing in size shows (Gorilla sold out in no time, Academy 2 is well on the way). It's been a long time since there's been a band that could divide opinion so clearly - you either love Cabbage or hate them (and in a way that's why the simple name is so clever) and that's why 2017 is going to be the year that they generate so much love and hatred. As we dust ourselves down, count the bruises and head off in the Salford night though, this felt like it was still our dark, dirty secret.