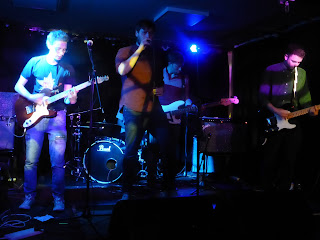 The Maitlands might never worry the scorers in the pop charts, but we suspect they care about that even less than we do. Outsiders on the vibrant live scene in Manchester, they probably also care little about that fact too, happy to play their own merry way around the venues of the city. We caught up with them in the cosy surroundings of Aatma as they headlined the first Atomic Catfight club night.

They go straight for the jugular with their opening track Dead Slow which drops into Kingdom United with its plea to "stay awhile" wrapped around an insistent repetitive beat that you subconsciously find yourself tapping your feet along to. It's something The Maitlands do very well, behind that devil may care exterior, they are actually seducing you with song that stop start, jump around from one direction to the other.  Bleak Repeat and Are You Listening from their recent Salford Democracy EP are very different in style, but identical in their impact on the listener, whilst early track Arrested Development is probably the highlight tonight.

The minimalist approach that they take live means you can hear everything in their mix - Jonty's driving drums, one minute spindly and raw, the next powering the song and creating the framework for Francis and Huw's dual guitars and Martin's bass.

Front man Carl, a gentle giant, is on good form, we suspect alcohol-induced, as he waffles on about subjects such as having been to Doncaster, being a weirdo for not having eaten turkey for a while, asking us if we've got any popcorn and them being pop supremacists. His height makes him an imposing front man, but his voice is also perfectly atuned to what his band mates are creating although at one point he's so taken in that he doesn't sing the first verse and stops the song.

The Fall comparisons are inevitable, but that would be doing them a massive disservice, because behind the slightly haphazard moments, they're an impressively tight live band when the mood takes them and they have songs that you'll find yourself humming along the melody to subconsciously for days. The Maitlands may be outsiders, but they're our outsiders.