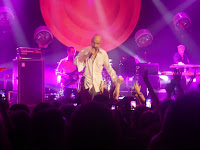 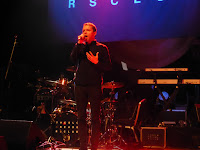 Day two of James' UK mini tour saw them return to Wolverhampton for the first time in nineteen years to the Civic. A set full of surprises and seven setlist changes from the previous night and a band at the peak of their powers in one of the best venues of this size in the country delighted a packed Black Country crowd. Support came from The Slow Readers Club.

We've said it plenty of times, but The Slow Readers Club look and sound at home on these bigger stages that have become the norm for them in 2016, both on the two tours with James and in their own right. They've blossomed into a band capable of filling academies across the land, not just in the delivery of the songs in their set, which impressively you can reel off a list of songs that were not played, but also in the way they carry themselves on stage. Jim's foot to foot hop as he delivers razor sharp bass lines and Kurtis's effortless rock star slightly distant cool have always been there, but the crisper clearer sound also allows us to appreciate just how good a drummer David is too, as you can hear the subtleties and nuances in what he does, no more so than at the very end of the set as he brings Know The Day Will Come to a close. 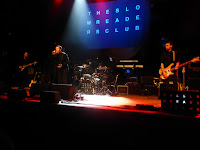 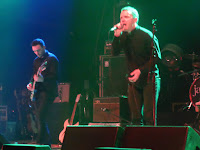 There's already a lot of love between them and James' audience, some of which is down to the band's patronage, but that alone doesn't explain the reaction they get. Songs from their debut (Sirens, Block Out The Sun and the anthemic One More Minute) mix with those from Cavalcade (the title track that opens the set, Days Like This Will Break Your Heart, Start Again, Forever In Your Debt, Plant The Seed, I Saw A Ghost and the aforementioned Know The Day Will Come) to create a set that doesn't let the audience's attention wander. These are big songs, about real human feelings we can relate to, and the cathartic impact of singing them works for those on and off the stage and by the end they've won over a whole new set of fans as the brisk business at the merchandise desk at the end of the night  proved.

James come on to stage fashionably late and launch themselves into Waltzing Along. It's a song that's often a barometer for a live James set. It's not one of their most adventurous songs in its recorded format, but how it's transformed into the live environment is often a marker for the intensity and challenge of what's to come. Tonight it reveals a band on fire, fresh off a debut tour of Australia and New Zealand with a mischievous glint in their eye that says they're going to challenge us and themselves with a set that packs a punch with the big hitters sprinkled liberally throughout, but one that also delves into the back catalogue and plucks out long-forgotten gems like the coolest magic trick around. 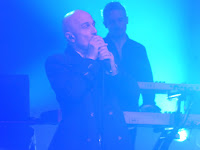 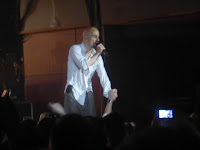 To My Surprise, once a few technical issues are ironed out, has the same delirious effects, its chorus exploding into spectacular light and two thousand or so of us yelling the line "were you just born an arsehole?" at the tops of our voices. It's testament to the impact that Girl At The End Of The World has had this year that it's greeted as an old friend rather than the tepid response bands of James' vintage often get with new material. James are, of course, a different breed. Similarly, arms are raised all round the venue, probably involuntarily in places, as the rippling, cascading crescendos of Surfer's Song roll over us like the waves the song's subject matter is riding. Tim's out and up on the barrier surveying all before him looking for connections. Ring The Bells returns to the set and has the delirious effect you'd expect from it. It's far more than an invitation to dance, it compels you to let loose and that's exactly what the audience do as it propels itself, accelerating under the weight of its own movement to its ecstatic conclusion.

Things are brought down a notch in terms of pace, but ratcheted up in terms of intensity for the quartet of Interrogation, Ten Below, English Beefcake and Five-O, four songs separated by years in terms of birth, but with an emotional power beating strongly from the heart at the centre of each of them. The self-doubt, inner questioning of Interrogation's lyrics around a swirling, menacing musical build contrasts with the wistful reminiscing on Tim's dark school boy days in nearby Shrewsbury where John Peel's show was one of the few escapes. English Beefcake, with enough ideas in it to fill an album, reaches a delirious celebratory conclusion of "there's nothing to say, I get in the way, unable to break obsession" that somehow feels like it's two thousand people joined together in some form of musical self-help confessional. Even more powerful is Five-O, which starts with an incredible violin solo from Saul that has Tim sat on Dave's drum riser to drink it all in with the rest of us and ends with Adrian's displaying a master class in slide guitar. 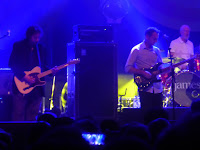 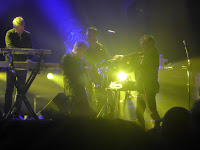 There's so much love in the room that you can almost feel it in the air after Moving On delivers a perfect message to those who have departed the world and it's not lost on Tim who tells us that they could feel who we were all thinking about during that song and that it was collectively for all of them. A quick change to the set list sees the reintroduction of Born Of Frustration, which acts like a release valve for any remaining emotional energy that any of us have left. It's one of those songs that they manage to play differently every time they tour it, so much scope for improvisation and adding to the much-loved original. Andy ends up on the balcony amongst the fans, encouraging us all to join in the Indian holler. To think once that simple minded journalists thought this was a copy of rock's dinosaurs.

"I love that you loved that one" are Tim's words to us after the end of a delicate, immaculately listened to Feet Of Clay, a song that benefits immensely from the quality of both the sound in the hall and the audience's attention. It's the type of James song that can often get lost mid-set with an audience hungry from the adrenaline release of the big hit singles and lose its place in the set, but, like all the Girl At The End Of The World songs, it fights its own battles and more than holds its own in the heat of the battle.

Next up is a real treat for the hardcore James fan. At the time they were splitting from Sire in 1988 and just before Gavan's departure, they were in a vein of rich songwriting form and from the sessions that spawned Sit Down, Burned was also born and then let out on the live long-deleted One Man Clapping album. It's a direct vitriolic response to the treatment they'd had from the music industry, but some of its core sentiments could equally relate to relationship betrayal. It's James from a different era, but also a James that you can still recognise - a slow powerful flame burning at its core that explodes into light at the point the chorus kicks in. We get something in our eye at this point as we're sure others in the hall do to. 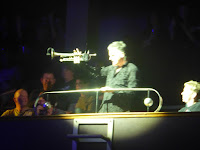 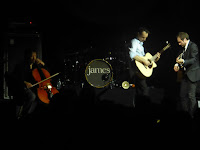 That recognition is evident in Dear John that follows, a song born of the same raw materials but with a completely different chemical reaction to create its end product. Tim dares us at the end to play it at a divorce ceremony and jokes that they've now got a song for every occasion.

Cello and acoustic guitars are brought out for an intimate acoustic She's A Star and Adrian's piercing cello cuts through the steaming hot air like a knife through soft butter as two thousand sets of arms reach for the sky and sing back every word. It then jumps straight into a wild, ecstatic Come Home that has everyone jumping around like we'd time travelled back to 1990, that siren call of Mark's still as impossible to resist now as it was back then. Tim's out amongst us, surfing on a sea of arms, almost dropped at one point, but somehow returned to the stage in one piece.

A rippling keyboard introduction doesn't reveal to all what's to follow, but the 1-2-3-4 call in certainly does and a Sit Down that changes pace at will as the crowd drown out Tim. He tells us it's a song that they don't play very often, and to us that's what keeps it so special rather than the elephant in the room that gets dragged out at the end of the night. The main set finishes with Attention, the stage cloaked in black as it reaches the middle section from which it slowly comes back in, through a sea of  raised arms clapping, and explodes back into light.

For the encore, Tim ventures up on to the balcony, dancing with those hemmed in by the seats and in a touching moment singing a verse and chorus holding someone who was unable to dance's hand and looking them straight in the eye as he did. By the time he makes it back to the stage, the rest of the band have already struck up Sometimes, a delirious version that the audience bring back at the end and then the band take the opportunity to come back too and improvise whilst Tim loses himself in his own world of dance and the rest of us do a very bad impersonation of him doing just that.  They finish with a sea of arms in the air and a celebratory Nothing But Love, a contrast to some of the dark themes that have gone before, and confirmation that in 2016, thirty odd years in, they still have the ability to not just craft magical journey songs, but something that can just grab at the heart strings and create magic.

It feels at the moment that James are on a roll, there's a glint in the collective eye that says they're not just here to entertain, they're here to have fun, to challenge us, to give us something different to what they gave the crowd the night before. It's at times like this that the band are at their best, unafraid of it coming crashing down if the improvisation or the song they haven't played for years doesn't quite come off, driven by their creative urges and feeding off each other and off us.

James played Waltzing Along, To My Surprise, Surfer's Song, Ring The Bells, Interrogation, Ten Below, English Beefcake, Five-O, Moving On, Born Of Frustration, Feet Of Clay, Burned, Dear John, She's A Star, Come Home, Sit Down, Attention, Just Like Fred Astaire, Sometimes and Nothing But Love.