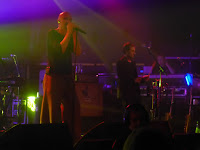 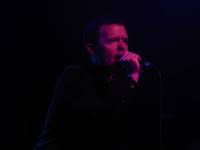 The third night of James's short December tour rolled into Sheffield on Friday night and continued in the same vein as the previous two, with a set that varied considerably from the previous ones, resurrection of old favourites from the depths of their back catalogue and some of their biggest songs in one triumphant event. Support came from Manchester's The Slow Readers Club who look and sound completely at home on these bigger stages.

It's been one of the real pleasures of the last two years to watch The Slow Readers Club move from playing to two men, a dog and Manchester legend Alex Staszko in the Castle's music room to headlining The Ritz and playing even bigger stages than that with James, On the basis of the reaction tonight, they're going to have to get used to places like this. There's an immediacy to them that grabs the unsuspecting punter that's come in early - the songs are big bold anthems that unfurl themselves out from the click in to every corner of the venue.  Whether it be songs from their first album like One More Minute and Sirens, songs that would have stormed the charts in the days when indie music did such now unthinkable things, or from last year's breakthrough Cavalcade, the impact is exactly the same. I Saw A Ghost has everyone punching the air and singing along with the refrain, just as they do later in the evening when James drop Born Of Frustration on us whilst another sea of hands clap along to the ferocious beat that David generates that underpins Forever In Your Debt, which feels like one of the most direct and magnificent love songs ever written. 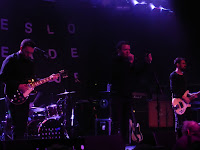 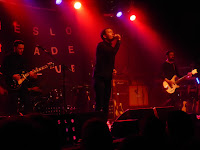 The other magical thing about them is that it's impossible not to warm to them, the ultra cool Kurt dropping his guard and mouthing along all the words, bassist Jim stomping his feet to the marching rhythms of Block Out The Sun and Start Again, whilst Aaron now exudes the confidence of a front man who knows just how good his band is and feeds off the reaction, whether it be the sheer volume of applause or the rising chants of "readers readers" that eminate from different corners of the room. Their apprenticeship is now over, the Ritz gig was their graduation and from now on, these halls should be theirs once album three hits.

As we noted after Wolverhampton, there's something in the waters in the James camp at the moment, that improvisational spirit, that desire to push themselves to the limits and to rightly stand up and not bow the clamour to just roll out the hits. In the soundcheck Tim sang a verse and chorus of Ya Ho following an audience member's question whilst All Good Boys, a b-side from the Millionaires era and another song that was asked about, found its way on to the set list too as did Walk Like You, the seven minute opening track on 2014's La Petite Mort and a perfect opener, 2010's Ten Below from the Night Before mini album, Vervaceous, the closing track from 1999's Millionaires and the 1985 single Hymn From A Village. 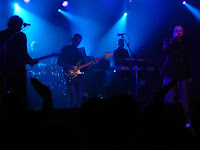 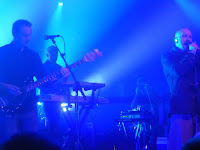 Their number 2 album from this year, Girl At The End Of The World, is also well-represented. To My Surprise, dedicated to Donald Trump, has two thousand people hollering "Were you just born an arsehole?" at an ear-shattering volume whilst Surfer's Song sees Tim doing just that across the front rows of the audience. At the end of the song, he jokes that it's the first time that a bouncer has pushed him into the crowd to encourage it and at the end of Dear John, he challenges us to use the song at a divorce ceremony. The main set and encore are also both completed by new songs, Attention and Nothing But Love, the former building from a stop start in the middle of the song and exploding in a sea of light into something that you can just step back, admire and drink in. Nothing But Love has the crowd swaying their arms in and out of time with Tim in a celebratory moment that proves that their best days are far from behind them.

The hits do obviously get an airing too, although as with any set list like this, individual favourites will be missing, but there's more than enough for even the most casual of fans in here with Ring The Bells, Waltzing Along, Born Of Frustration, stripped down Just Like Fred Astaire and She's A Star, Getting Away With It, Come Home and an exuberant joyful Sometimes. Some of these songs have been rested and the reignited love for them is clear in the way the band deliver them - and that love is magnified by the way the crowd sing back every word as if they mean everything to them. It's that which is at the very heart of what makes James unique.

There's plenty of space for improvisation in the set too. Five-O has Saul's violin as its first dance as he takes centre stage and Adrian letting loose on slide guitar mid-song. They've done that before, but it's different each night. Vervaceous, a brave but inspired choice in the set list, shows too that the James audience can listen and soak in something that isn't as immediate as the big hits and the in-your-face bravado of the new songs. It has an almost spiritual feel to it, far removed from the recorded version, full of ecstatic swoops and tunneling descents that captivate the crowd. That spiritual feeling also runs through All Good Boys which has six of them singing in unison at the end. 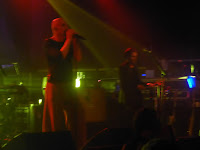 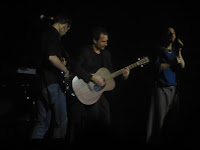 Come Home, Born Of Frustration, Getting Away With It and of course the transcending Sometimes deliver a different type of ecstasy, one driven along by the desire to dance as much as you could in the cramped spaces and to sing every word like it's some form of cleansing of the soul, whilst stripping back Just Like Fred Astaire and She's A Star and reinventing them with cello, plus trumpet on She's A Star, works magnificently too. These are nights that memories are made of, like the ones that Tim references when he talks about having watched The Clash and Iggy Pop in these four walls in the days when it was called Top Rank.

As we said, there's something special happening on this mini tour, a feeling that comes once every few years with a James tour where you feel everything's falling into place perfectly, the band are taking risks and they're all coming off and there's a communal spirit that rolls off from the stage, over the crowd to the back of the room then turns round and envelops all of us and all of them.

James played Walk Like You, Ring The Bells, Surfer's Song, To My Surprise, Hymn From A Village, Ten Below, Waltzing Along, Moving On, Born Of Frustration, Vervaceous, All Good Boys, Five-O, Dear John, Just Like Fred Astaire, Getting Away With It (All Messed Up), Come Home, Attention, She's A Star, Sometimes and Nothing But Love.