Festival Preview - When In Manchester 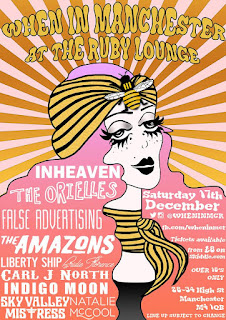 We don't do previews as a rule, but we'll make an exception for When In Manchester. It's a festival that was the brain child of four young women (Abi, Miriam, Ellen and Nicole) that ran their first successful event at Gullivers and The Castle back in April. Their second festival takes place at The Ruby Lounge on Saturday and promises ten up-and-coming acts across two stages, some of whose profile has already sky-rocketed since they were booked. It could be the last chance to catch some of them in such intimate surroundings and an excellent opportunity to show your support to young promoters taking on the big boys.


The Amazons have been added to the BBC Sound of 2017 long list, one of the few guitar bands that have made the list which is no mean achievement in its own right. Their most recent single In My Mind has won them a whole new batch of admirers and the ear of Radio 1 and they will certainly be on much bigger stages in early 2017.

It's a path that Inheaven have already trodden recently as main support on the most recent Blossoms' tour where they've delivered performances that have backed up the growing buzz around them that's been built around singles such as Treats, which recently won the DIY Readers' Poll single of the year, All There Is, Baby's Alright, Bitter Town and Regeneration.

The Orielles have been around on the local scene for about three years now and were recently selected for the Off The Record festival, but the most newsworthy event in the threesome's year was the announcement that they'd signed to Heavenly Recordings, home to such legendary acts over the years as Doves, Saint Etienne and The Magic Numbers.  With that backing, it looks like 2017 could be a big year for Esme, Henry and Sid and When In Manchester will form the perfect sign-off for their most successful year yet.

False Advertising are another band whose star is in the ascendancy. They joined the festival late after Dantevilles pulled out and in 2016 they followed up their debut album with their Brainless EP and a series of scintillating live dates that seemed to grow both in terms of size and intensity during the year as Jen and Chris swap instruments and share lead vocals throughout their no-holds barred live set.

Sheffield's Liberty Ship return to Manchester after their recent support slot with Reverend And The Makers on their acoustic tour. A band that trades in delicious classic melodies steeped in a love of the great bands of the past but given a vibrant modern flair to them, Liberty Ship are sure to delight attendees with songs such as their two recent singles Don't Wish and Learning To Fly.

Liverpool's Natalie McCool released her second album The Great Unknown a little while back and is coming to Manchester to play tracks from it and her debut. An intense live performer, either solo, with a drummer or full band, songs like Pins, Dig It Out and Fortress pack an impressive heartfelt punch.


Bridie Florence will be bringing her debut EP Mind In The Making to Manchester for the festival. Having played every instrument on that record including digital drums and with a distinctive vocal, it'll be intriguing to catch her live show and see how she transforms the songs.

Sky Valley Mistress describe themselves as "the best thing you've never heard", but when you do, and their EP Rivals, Hounds and Rebel Sisters is the place to start, you'll know that they stand for dirty blues and rock and roll, contrasting with a lot of the rest of the line-up in some respects, but never out of place.

Liverpool five-piece Indigo Moon will add a psychedelic twist to proceedings with their self-defined "heavy dream psych bitch rock", previewing tracks from their Anatomy EP and ensuring that the festival will have a real diversity in styles.

Carl North has been making an impressive name for himself on the Manchester open mic scene in the past few months and will be appearing on the festival's second stage which will also be in the Ruby Lounge.

Proceedings kick off at 2.30 and will run through until 10. Tickets are still available from the following link. Twelve pounds for ten acts is pretty impressive value considering you'll be paying more than that to watch some of them on their own within a few months.