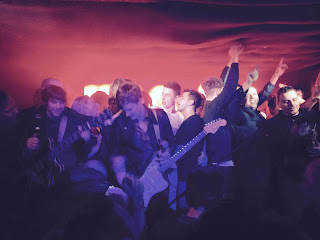 The final moments of The Tapestry's existence as a band are chaotic, shambolic, drunken and magnificent, with a full on stage invasion, equipment being knocked over and out and everyone singing along to Rode Your Luck, one of their finest tracks and a fitting epitaph to a foursome that were at their best in their riotous live shows that should have catapulted them to bigger and better things.

There's so much love in the room by the time The Tapestry make it onto stage, fashionably late as you'd expect. A melting pot of Boxing Day alcoholic overindulgence (audience, not band) and the thought of saying goodbye for one last time to a band that put Tameside (or Shameside as they often referred to it) on the map. The Tapestry as ever don't fail to deliver.  Tonight's set is pretty much everything they've ever recorded - fifteen songs from across the five years or so they've been on the scene. It's a reminder of what a great band they've been, even if the volume of their output probably didn't do them any favours.

Their early songs such as Take Turns and Another Century sit well alongside more recent singles Look Out, Right As Rain and We Talk and the audience's reaction shows little differentiation between them. As powerful as ever, driven by Zara's drums and her partner in the rhythm section Katy on bass, the songs make you want to dance, a nervous vital energy flowing through them that sets the mood for the whole evening. As ever, Liam's an engaging, energetic front man who feeds off the energy of the crowd and turns it back round on to us, whilst Dyna is forever the enigma that is Dyna, throwaway comments between songs that half make sense, but one of the finest guitarists around on the local scene when he lets loose. 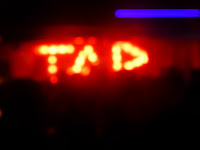 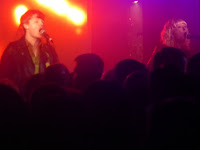 There's plenty of humour too, some of it dark, Liam quips about Lostprophets, Katy asks for the strobes to be put back on so she can finish off a fit and there's some surreal moments where the DJ "Pleasurefingers" seems to think we want to hear him rather the band, but he does send people forward for the start of the encore with specially made leather jackets for the band so we let him off. As the penultimate, and possibly their best song, Infatuation, draws to a close, Liam tells us all to get on stage and far too many of us oblige. Leads get pulled out, band members can hardly play because there's no space - and Rode Your Luck, their adrenaline-fueled anthem that could almost be their own obituary, almost collapses under the weight of the madness that engulfs the place. People are on each other's shoulders, ducking to avoid banging their head on the roof, others sing different parts of the song and Katy ends up lying across Zara after diving over the drums.

Details don't seem to matter by the end of the night, The Tapestry went out in style in their town with their people. Other bands might be more successful, but they'll always have a place in the hearts of those that came across them and very few bands can say that.

Our Farewell To The Tapestry piece can be found here.