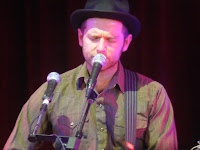 Every year David Ford puts on a special event called Milk And Cookies in December to raise money for charity. It's no ordinary gig though, as the title suggests people bring milk and cookies to sell for donations, there's auctions, an interval and a selection of his own songs, some covers he's selected and others that are randomly picked from a book by members of the audience. It all sounds like it could go terribly wrong, but it never does thanks to Ford's ability to fashion covers of classic songs, guilty pleasures and some of his own favourites from his home-made looping machines and the most basic of kit.

The mix of covers Ford plays in the first half of the set is testament to his educated musical knowledge, opening up with AC/DC's You Shook Me All Night Long, Tom Waits' Martha (the song after which his wife and he named their recently born daughter who they introduce prior to playing it as they explain the reason for the evening) and Bobby Bare's How I Got To Memphis. In Ford tradition, the final song of the first part is deemed to be the impossible cover, the one that should never be attempted (previous years have seen Bat Out Of Hell, Thriller, Toxic and Paranoid Android amongst others) and this year he pulls off The Eagles' Hotel California, slowly building layers of guitar parts to create the song before letting loose on his final guitar. It might please the purists, but it absolutely delighted the crowd that was packed in Bush Hall for its inventive and ambitious scale. Less polished in the first half was an attempt at Berlin's Take My Breath Away, which was chosen by the random number generator of audience participation, with the song on the page number chosen in a book of British Hit Singles being played - but he turned it round by playing with the settings on his keyboard and delivering the song in a number of different styles. 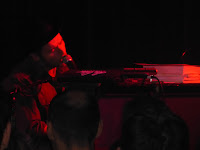 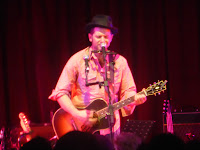 He also plays his own songs of course and there's a selection from across his growing back catalogue. His signature song State Of The Union gets the warmest reception, due to it being the song that brought many to him a decade ago, but his journey through the evening takes him past Song For The Road, one of the most beautiful love songs you're ever likely to hear, the rousing The Ballad Of Miss Lily and Waiting For The Storm and Pour A Little Poison.

Add in a magnificently vitriolic I Don't Care What You Call Me, still played with the bitter passion and resentment that it had ten years ago and the bittersweet One Of These Days and the Ford picture to date is complete. We're also given two insights into the future in two unnamed songs, one about macroeconomics, which he tells us is the theme of his next album due next summer and a second one about going to the scan for when they discovered Martha was on her way. Macroeconomics is an interesting subject for a concept album, and one that David has touched on with the odd song over his career, but its lyrics about "piggy banks" and "money trains jumping the tracks" and his fastidious quest for information suggests that it'll the most articulate one. 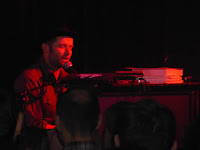 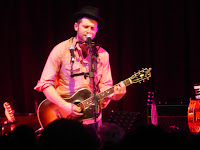 Some of the second half's covers are a little less serious in their nature than the first's as David makes use of the books again. They deal him a harsh hand with Right Said Fred's Deeply Dippy, Motorhead's Ace Of Spades and Ace Of Base's All That She Wants. He delivers Motorhead "funk style" to a rapturous response whilst the other two are transformed from pop fluff into real rock songs, the guitar solo in Deeply Dippy in particular.

He does however pay tribute to two of the most significant deaths of the year in covering Bowie's Life On Mars and Prince's Purple Rain to bookend his second set. The first is just a guitar and him, the second looping and layering using every instrument available to him as the crowd work out what it is he's building to. He manages to both pay his respects to the original and the artist whilst at the same time he puts his own mark on them, which is no mean feat.

Milk And Cookies is a unique event from a unique artist, one that's exceptionally serious and intense when it comes to his own work, but one who isn't afraid to let his hair down and have some fun and all of that in the name of charity. He risks, but never gets, ridicule by leaving himself open to the vagaries of the random song selection, and people shouting out 69 every time doing this, but what it ultimately reveals is that he's one of the most accomplished musicians in the country when it comes to improvisation, making use of what he's got to hand (often hand-crafted) and entertaining. He doesn't play the games needed to be successful but that makes him even more unique and special.

There's more information about Reverse Rett on their website about the condition and the work that the charity does to fund research on a disturbing condition that impacts young girls from the age of two.