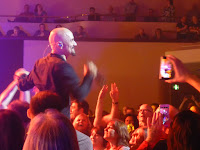 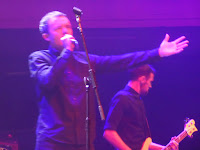 James returned to Nottingham Royal Centre to fulfil the gig they had to cancel at the end of their May tour due to Tim Booth's illness to deliver a set full of songs from their number 2 album Girl At The End Of The World as well as highlights from their pre- and post-reformation. Support came from an impressive set from Manchester's The Slow Readers Club who now feel very much at home in these big venues.

A chant of "Readers, Readers" welcomes The Slow Readers Club as they make their way to the stage. Whilst they've had the patronage of James this year, it's far more than that which generates the reaction they get, one of the most impressive we've heard from a support band even though as established as Echo And The Bunnymen, Athlete and Starsailor as they deliver a forty minute set that covers ground from both their self-titled debut and last year's Cavalcade. 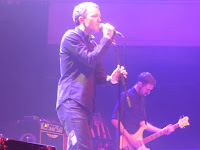 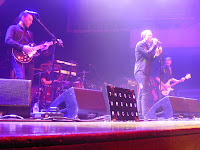 The impact of having three major sell-out headline gigs in Dublin, Manchester and London is very evident in the confidence of the band, the way they effortless soak in the imposing environment that they're in and make a sound that feels like it both fills the cavernous corners of the hall as well as absolutely belonging here. It's something that's valid whether it's the imperious One More Minute, Sirens or Block Out The Sun from the debut or the songs that brought them to wider attention on Cavalcade - the title track that opens the set, the singles I Saw A Ghost, Forever In Your Debt, Start Again and Plant The Seed. It very much feels like this tour is the end of their apprenticeship and they're now ready, armed and tooled up to capitalise on their most recent success in their own right.

There's a real sense of anticipation as James take to the stage, with Tim promising to make up for the last-minute cancellation of the May gig, and they do that in spades. They make the awkward environment of having seats in feel like something of an irrelevance as large chunks of the audience are up on their feet dancing from the off and don't sit down throughout. There's no compromise either with the setlist as nine of the twelve songs from Girl At The End Of The World are in the set and there's the less obvious choices of older songs, in particular Vervaceous and I Want To Go Home which are resurrected after a significant absence from the set rather than sitting back on the laurels and playing the likes of Sit Down, Say Something, Ring The Bells and Laid, none of which make the cut. James are wilfully awkward in the choice of their setlists, but they have a fan base that to a large extent knows what they're getting. 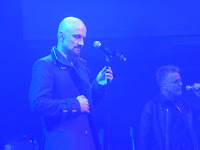 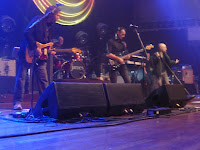 After a false start with To My Surprise, which Tim says is about Donald Trump, the songs come thick and fast. Waking is stretched, twisted and feels like a vibrant, mischievous brother of its recorded version, whilst Getting Away With It (All Messed Up) gets any waverers on their feet dancing. It's always a problem of seated gigs in that they're like a football match these days when you end up sat next to the prawn sandwich brigade while your mates are in a different stand, but it doesn't feel like that tonight where we're stood.

Moving On is dedicated to anyone who's lost someone recently, Tim tells the story of losing his own mum and seeing her before her death. He jokes about Victorian times after explaining the illness he had back in May and which Jim and Saul contracted. But before they play he runs off to the side of the stage to pick up some earplugs for a young boy in the front row. At the end he dedicates it to Leonard Cohen who died with dignity.

Saul opens up a beautiful Five-O with a violin piece that's exquisite whilst Tim sits and soaks up what his bandmates are creating. Adrian's slide guitar in the middle section is stunning as well, being on the front row we can see exactly what his fingers are doing and the impact they have, making that part of the song his own.  I Wanna Go Home, another song brought back after a long absence, is equally powerful, building then exploding into a fireball of noise as Tim holds a note for what seems like an eternity. Interrogation has a similarly powerful and forceful impact, a song like so many of James' best that lacks the immediacy of their biggest songs but makes up for it with an intensity that increases as the song progresses.  Vervaceous, the final track from Millionaires, is so far removed from its recorded version that it might be a different song, the audience applaud at three points thinking the song has been done before it comes back in and heads for the stars. 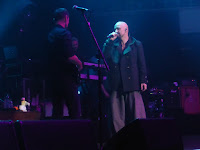 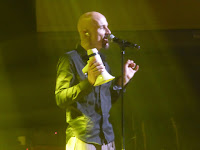 There's delicate moments as well, although you can hear the crowd singing back Feet Of Clay, which Tim explains is a song about wanting to die, over him at points in the song, such is this impact Girl has had with the fan base, probably more so than any of the other post-reformation albums. Dear John and Surfer's Song, the latter having Tim out amongst us perched precariously on a chair, don't feel at all out of place or shy in the presence of the beter known songs around them.  Like Moving On, Curse Curse has engraved itself into the favourites lists of large sections of the fanbase, its huge chorus sending a sea of arms into the air and voices hollering out the punchline. It feels like a modern day Come Home and tellingly that follows and gets the few that haven't bought in by this point to their feet.

Attention is the perfect end to the main set, starting off quietly, before stopping, building back in and then heading off in a completely different direction as so many of James' best songs do. Add in the light show that complements it perfectly and it's an incredibly powerful way to end the set without having to resort to the predictable.

Just Like Fred Astaire starts with Jim and Saul strumming acoustics until Adrian joins in on cello and Dave and Mark contribute to a slowed down stripped back version that works wonderfully and has couples holding hands and looking doe-eyed at each other. She's A Star had also benefitted from a similarly sparse approach earlier in the evening before Tim told us that it was written about a local Nottingham girl called Serena.

Sometimes is ecstatic, Adrian makes his way to the front of the stage and lets loose with a solo that should silence any doubters to his contribution to the band. Tonight, he's the star of the show, more confident and forward than we've seen him since he stepped into Larry's shoes last year, making songs his own and not afraid to stamp his presence on them. As the song stops the crowd somehow manage to sing the refrain completely out of sync with each other until we get it right and take the song away then until the band come in.  Nothing But Love concludes the first part of the encore with its mandolins giving it a delightfully jagged edge to it as the crowd wave their arm from side to side in time with Tim as the exultant celebration of love is bellowed back by a couple of thousand people.

They've still got time for another song and after some deliberation they go with Sound. Andy ends up on the balcony, leaning over, trumpet in hand amongst the people, whilst the song itself as ever feels like it's been tweaked, revisited and relived rather than being left to go stale. It's a perfect ending to the night as it embodies so much about what makes James special.

The good people of Nottingham give them a massive ovation and you sense they've been forgiven for the events of May and the late cancellation. It's not an obvious crowd-pleasing set though in an environment that doesn't lend itself necessarily to the celebratory atmosphere of a traditional standing James gig, but they measured the mood and the crowd just right to create something that was just what we all needed, a mix of the old and the new, the hits and the rarities.

James played To My Surprise, Waking, Getting Away With It (All Messed Up), Moving On, Five-O, I Wanna Go Home, Interrogation, Move Down South, Tomorrow, Vervaceous, Feet Of Clay, She's A Star, Dear John, Surfer's Song, Curse Curse, Come Home, Attention, Just Like Fred Astaire, Sometimes, Nothing But Love and Sound.