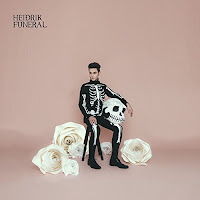 Funeral is the second album by Faroese artist Heidrik. It's a magnificent piece of art, delicate in its construction but opulent in its furnishings, easy to immerse yourself in but with depths that reveal themselves with each listen. It's given us food for thought in our already shifting album of the year poll.

"Instead of the electropop for which he is apparently known, his incredible voice (he's been compared to Buckley, Anohni and Orbison - and they're not kidding) is accompanied by a guitar bloke and a uke bloke. Could be shite. But absolutely isn't. A revelation!" was how our friend Cath described his set at Iceland Airwaves and enough for us to track down a digital copy and subsequently pick up the most expensive piece of single vinyl I've ever paid for. But worth every krona.

"I don't understand the words they say in love songs, it would be grand if i could write my own ones" is Heidrik's opening shot on the record and sets the lyrical tone for what's to come. It's an album laden with references to trying to find love,  whether it be Heidrik himself or the characters whose tales he paints, often set to a minimal backing and moments where the strings or a lonely piano and the haunting vocal harmonies positively pour out of the speakers.

On second track Red Hair you can hear the emotion in his voice, be it soaring to reach high notes or crackling under the weight of feeling. And it's the voice that takes centre stage through most of the album, its intonation telling the listener as much as the words themselves at points. Songs don't outstay their welcome either, most come in under three minutes.

Change Of Frame has a melee of handclaps, female harmonies and an unsettling close to off key acoustic guitar running through it, but the chorus has a delirious weirdly upbeat earworm effect that'll mean you'll struggle to shift it.

White Flag, as the title suggests, is contemplating giving up the fruitless search for love  "I've been lost from course for so long, loneliness has been my one song" but there's a positivity to the chorus that spins this around all laden with dramatic strings playing in the background "before you came around, love was a battleground I thought I would fight alone, but then you came around."

The positivity doesn't last long though as Boy is about the death and looking back reminiscing about a lost loved one. The song doesn't say it overtly, but it appears to talk about homophobia - "all in God's name wanted him to feel shame." Black For The Occasion is similarly foreboding, declaring "the end is about to start" to a similarly tense string backing that's so minimal that the sparseness merely accentuates the tension.

Remember Me recalls The Miserable Rich's debut Twelve Ways To Count in both in its style and in Heidrik's vocal - the ability to turn minimal into something that the listener immediately hooks on to is a very difficult trick to pull off, but by the end of the song you're hanging on the next line. Monster is a little bit more traditional in its folk arrangements, but still manages to unsettle the listener with little twists and something new that reveals itself with each listen. Flower On Your Grave concludes the album, and follows the funereal theme that pervades pieces of the album with strings and resigned words and harmonies.

Funeral is a stunning record, one that has emotions pouring out of every note with an intensity that grabs the listener and doesn't let go. It reveals something new with every listen whilst ever losing its raw power through repetition. It's the best advertisement you'll ever hear for going out of your comfort zone to discover new music.

Email ThisBlogThis!Share to TwitterShare to FacebookShare to Pinterest
Labels: Heidrik