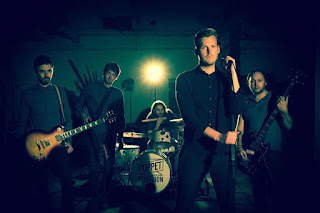 Rounding a successful year off with their most radio friendly EP yet, Puppet Rebellion demonstrate again that they deserve their place in the “next big thing” category.

2016 has been a good year for Manchester's Puppet Rebellion - an acclaimed performance at Kendal Calling and personally picked to support The Slow Readers Club at their recent sell out shows in Manchester and London being amongst the highlights. However, not content to rest on their laurels, they end the year with a highly promising new four track EP featuring three new songs and a reworking of their stunning debut.

The Pact opens the new EP and sees the band deliver their popiest tune to date whilst still retaining the big epic sound from the band - Oliver, Paul, Craig, Jim and Henry - that audiences have come to expect. To be fair, you could make a case for any of the new songs presented here being the lead track. The Pact is an up tempo electro pop nugget, complete with a big soaring vocal from Oliver Davies.

Fragments has been part of the live set for a while now and has a singalong quality coupled with a driving rhythm section. Maybe You Won't features their trademark dual guitarists and gives a nod to Life Is In Your Hands from their previous EP. The recorded version presented here, whilst not quite capturing the energy the band create when they play it live, still marks Puppet Rebellion out from many of their contemporaries.

The debut EP from 2014, which drew admiration from audiences and critics alike is revisited here with a reworking of The Greatest Lie Ever Told. Recorded now with their new(ish) line up, it has lost now of its appeal or raw charm. The Greatest Lie... usually ends the live show in spectacular fashion and it is not difficult to see why. The Greatest Lies… captures a band at their very peak.

With producer Gavin Monaghan once again at the helm, The Pact EP is a bold, confident statement from a band going forward. A welcome addition to their back catalogue and another step closer to that classic debut album.