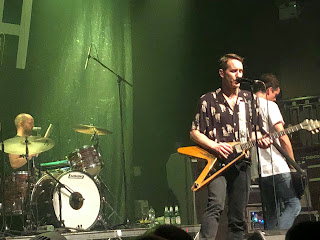 With the release of their eighth studio album Islands, Ash are back on the road and we caught the penultimate show of their UK tour at The Ritz in Manchester as they delighted a crowd with a mix of their biggest hits and a healthy selection of songs from Islands that show that their spark still burns bright in the third decade of their existence as a band.

Ash are in that tricky place bands of their era find themselves in. There's a tug of war between the commercial aspect of being in a band that says you should take the route trodden by an increasing amount of acts these days, including some whose principles wouldn't have allowed them such chicanery in their heyday, and the artistic which cries out for them to ignore the money men and trust their creative instincts and play new material. It's a fine line and it's on show tonight as the mosh pit burgeons at the opening bars of tracks off 1977 and Free All Angels and is much more sedate for the newer material that many won't have heard or even know exists. 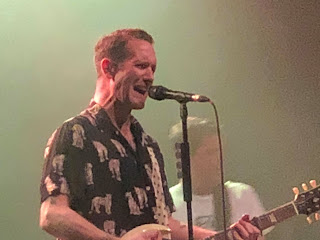 They get it just right though, with the seven tracks from Islands being judicious selections. Buzzkill has all that pent-up anger and energy that hasn't dissipated one bit in the intervening years since Kung Fu and Girl From Mars whilst Confessions In The Pool, a more ambitious widescreen track, has the audience clapping along without prompting in the breakdown, a sign that they're still able to make connections with new material and it has an audience. True Story opens the set, perhaps as a sign of intent, and again doesn't shirk that responsibility to stand up to more obvious candidates for that role. Incoming Waves shows that they've still got that ability to control the pace of a song too, starting off slow and building intensely to an explosion of sound. Add in Annabel, Is It True? and All That I Have Left as well as the superb Cocoon from their previous album 2015's Kablammo! and modern age Ash comes out fighting and lands some pretty hefty punches.

There's plenty though for those looking to relive the heady days of their youth. Everything you'd expect from an Ash set is present and correct and it's an impressive list of singles that they can reel off - the run of top twenty singles off 1977 starting with Girl From Mars and Angel Interceptor before going top ten with Goldfinger and Oh Yeah and the album soundtrack A Life Less Ordinary, the underrated Nu-Clear Sounds' Wild Surf and the blood-curdling screams of Numbskull through to their renaissance album Free All Angels' Burn Baby Burn, Shining Light and encore opener Walking Barefoot and Meltdown's lead single Orpheus. Unlike many other bands they don't mess with the magic formula of these songs, they deliver them hard straight and fast and the only real concession is a little bit of showmanship in the breakdowns that underlines just how tight and accomplished a live unit they are (and always have been).

They don't say a great deal between songs as it's never been their thing, but that allows them to get through twenty-three songs in an hour and a half. Mark is as energetic as he's ever been on bass, looking at times like he's playing in his room, throwing shapes and himself around the stage, lost in the music and oblivious, Tim's voice is probably stronger now than it's ever been, more controlled yet focused and at the back of the stage Rick's the glue that binds the whole thing together, dictating the pace of what's going on around him like a conductor. 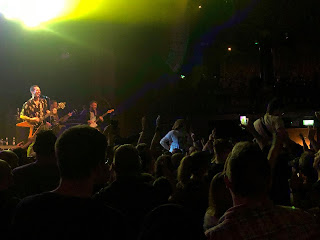 There's a great moment towards the end where they invite support band Death By Unga Bunga on stage and they deliver a wild cover of Abba's Does Your Mother Now that ends up with their guitarist out in the crowd perched on Mark's shoulder including a very dramatic theatrical end to the song and front man Sebastian sharing lead vocals with Tim and ending up down on the barrier conducting the audience singalong.

As they finish with a manic Lose Control and the house lights come up and they take their final bows, it's worth reflecting how well Ash are managing the balance between their legacy and their desire to make and present new music. Some bands just rest on the weight of their back catalogue and everyone knows what they're going to get, some stick two fingers up at convention and play new material in abundance that doesn't stand up to their past. Ash have got it just right, Islands stands tall and comes out fighting above its weight and the band are rightly showcasing a large part of it on this tour whilst being savvy enough to send the punters out of the door buzzing with a final adieu of what they know and love.

Ash's official website can be found here - they finish their UK tour at London's Forum tomorrow night (24) before heading to Europe for a set of dates that can be found on their website.