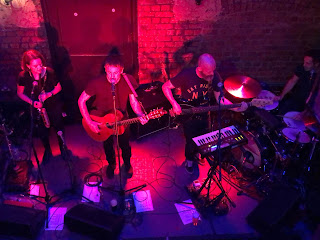 To celebrate the launch of his new single and title track from his forthcoming second album Then Lightning, Mano McLaughlin played an intimate eleven-song set in the Eagle Inn in Salford, a stone's throw from Blueprint Studios where the album was recorded.

This show also doubles up as an album preview as eight songs off the new record as well as a few live favourites from his previous band Meadow are being played tonight and nothing off his debut Peach Got Bones. With his partners-in-crime from the record Gary on bass and Tim on drums and Bil adding brass and melodica to the mix, the songs are fleshed out and deep and rich and warm in their nature.

The subject matter moves from the troubles in Northern Ireland on Thirteen Pieces Of Quiet to rage at Tory austerity on Big Truck to more personal reflections on the likes of I Haven't Changed or the beautifully reflective Meadow track Bus Stop Strangers, which is crying out to be re-recorded. Yet whilst the songs may delve into such a diverse range of topics, the songs themselves are deeply entrenched in traditional songwriting values, of which Mano is a maestro. Songs that most of the people in the room have never heard before immediately feel like old friends, something that has Mano's peers singing his praises and which Then Lightning will hopefully bring to a wider audience.

Combined with Mano's affable modest personality when he's talking about songs or quipping about John Grant, it's impossible not to be drawn into the performance and Gary, Tim and Bil provide the perfect canvas for him to paint these words. It's an intuitive relationship built up from the album's recording sessions and you can sense the camaraderie as they shift glances at each other as the next new song gets a welcoming reception that's well deserved from an appreciative audience that shuts up and listens.

Plans are afoot now for the release of Then Lightning and hopefully some deserved and long overdue recognition for Mano's songwriting and more live shows like this one where the audience are captivated by the songs and the performance rather than the event.